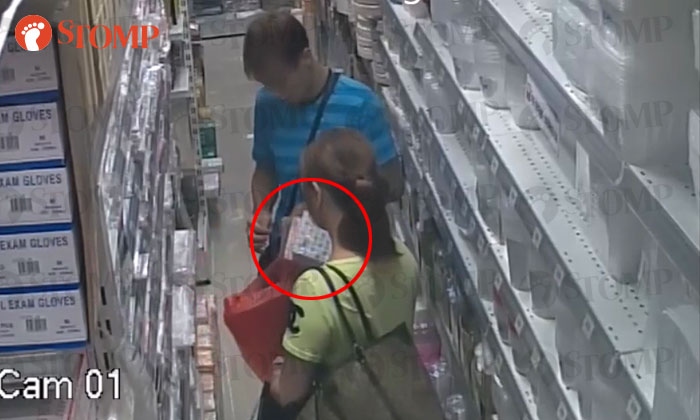 A man and a woman were recorded on camera taking items from a shelf in a shop at Bishan Street 13 on Jul 13 at around 8.00pm.

Stomper Karen alerted Stomp to what happened and sent us the CCTV recording showing the events that took place.

In the video, the duo can first be seen browsing through merchandise in the shop.

Thereafter, they walked to the end of an aisle. There, the woman took a stack of items from the shelf, and placed it into a paper bag.

She then continued taking several other items while her male companion looked on.

Before the halfway mark of the video, the woman started placing more articles into a huge red plastic bag that the man had brought.

After the plastic bag appeared to be full, she stuffed several other items into a small black bag that was slung over the man's shoulders.

At one point, a customer appeared. The duo stopped what they were doing and proceeded to browse through the shelves .

When the customer left, the man started re-arranging the items that were in his bags.

There were three staffers at the shop at that point, but they were busy with customers.

The Stomper has lodged a police report over the incident.

Note: The captions were included in the video by the Stomper. Stomp did not edit the video in any way with the exception of the opening/closing scenes and the watermark on the top right.

Related Stories
Woman thinks nobody will know that she took $45 wallet from Bugis Junction pushcart
Guy takes $10 sunglasses and stuffs it in his pocket at shopping mall store
Woman takes shirt from Clementi Mall store, hides it on herself and leaves without paying
More About:
bishan
shop
suspicious
police