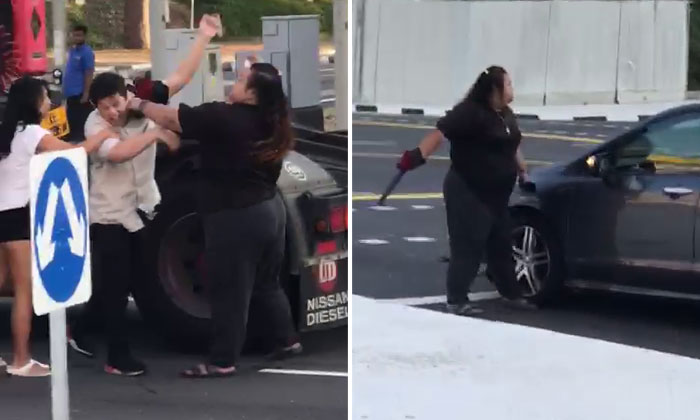 A man and woman were arrested for affray after getting into a brawl at Changi South Avenue 3 on Wednesday morning (July 31).

A Stomper alerted Stomp to a video of the incident that has been circulating on social media.

In the video, the male car driver and female truck driver are seen shouting, shoving and hurling vulgarities at each other as they stand on the road between their vehicles.

The truck's left side mirror appears to be damaged although it is unclear how that happened.

A passer-by is seen trying to break up the brawl and says: "It's only an accident... Stop fighting, call the police."

However, the woman is later seen grabbing a rod from her truck and using it to hit the side mirrors of the man's car.

The male driver then approaches the people recording the video and argues with them over who started the fight.

In response to a Stomp query, the police said they were alerted to a call for assistance at 8.10am.

"A 23-year-old man and 24-year-old woman were arrested for affray," a police spokesman said.

The police said that the drivers will be charged in court on Thursday (Aug 1).