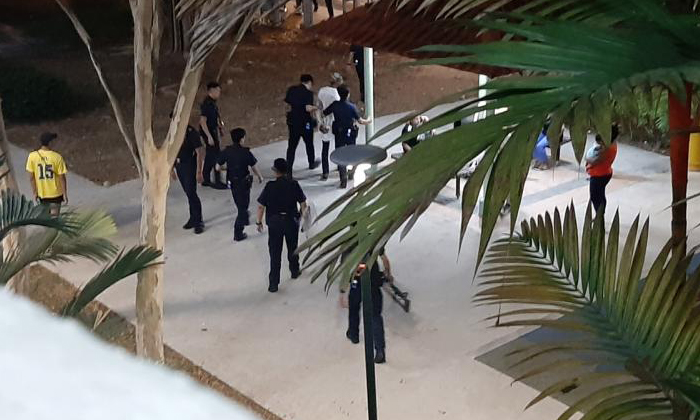 A 41-year-old man was arrested after causing a scene in Toa Payoh on Monday evening (Sep 23), during which he allegedly wielded a knife and threatened his son.

According to Lianhe Zaobao, the incident took place at a playground near Block 106 Lorong 1 Toa Payoh at around 6pm.

A resident told Zaobao that a man in a white shirt had suddenly kicked up a ruckus and became verbally abusive, even getting into an argument with a teenager.

This went on for one and a half hours.

The man then reportedly shouted, "Parang knife!" and rushed back to his ground-floor flat, where he changed clothes and returned with a 10cm 'machete'.

According to the resident, the man ran around 100m to Braddell MRT station while wielding the knife.

Another witness said he saw the man with two 'poles' of different thickness at the MRT station.

The witness added: "The man was walking around and going back home. He suddenly got angry and lashed out at passers-by, shouting 'see what see?' in Hokkien.

"He also struck a pillar with his pole.

"Everyone at the scene got a shock."

Responding to a Stomp query, the police said they were alerted to a case of disorderly behaviour at 6.45pm and arrested the man in relation to the case.

Zaobao reported that when questioned by the police, another eyewitness said the man had overheard his 14-year-old son badmouthing him and therefore picked a fight with the latter.

The man allegedly threatened his son, causing the latter to call for help.

The man eventually calmed down at around 7.30pm and was seen being taken away by the police.