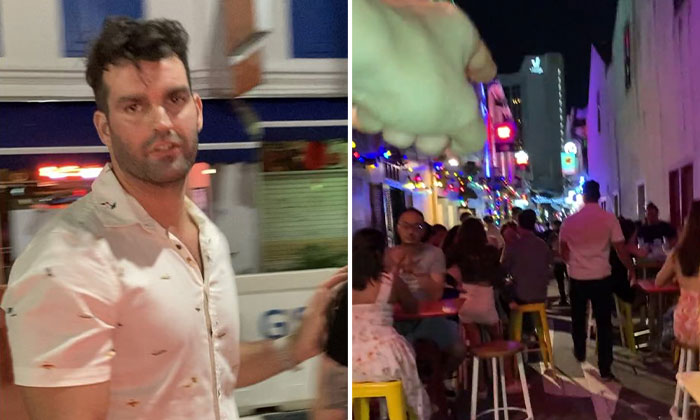 The police are investigating an incident in which a man allegedly punched a taxi driver along Beach Road.

Twitter user Malcolm Keating, who is an assistant professor of philosophy at Yale-NUS, shared a photo of the man on his feed.

He said he saw the man punch a taxi uncle on Saturday night (Apr 23).

I'm briefly leaving private mode to share an image of man who I saw punch a Singapore taxi uncle last night on Beach Road. He got into our taxi which was on call and when the driver asked him to leave and I opened the back door, he reached up and hit the driver. (1/3) pic.twitter.com/sfcgpvo7AS

"He got into our taxi which was on call and when the driver asked him to leave and I opened the back door, he reached up and hit the driver," Keating said.

"He got out of the car and as I filmed him, he shoved me into Beach Road (thankfully I dodged the coming car!) then walked away, while we shouted at him to stop."

In his thread, Keating included a video of himself chasing after the man and asking someone to "call the cops" while pointing at the man and shouting "he just assaulted someone".

He urged others to contact the police if they recognise the man in the video.

He added that on Sunday morning (Apr 25), he talked to the cabby who had visited a doctor.

"I think he's okay but shaken up," Keating said.

"This was [inexcusable] behaviour and I'd like to see this man be held accountable."

In response to queries, ComfortDelGro group chief branding and communications officer Tammy Tan said on Monday that the company is in touch with the cabby and will be waiving rental for the three days of medical leave he has been given.

"Those who have been assaulted have been told not to retaliate when facing a threatening situation but to try and remember as much as they can, so that they can assist the police in their investigations," said Ms Tan.

She added that in such cases, taxi drivers should file a police report and forward it to the company for follow-up action.

"We help them with their medical claims, losses and also rental waiver, if needed. We also compensate them for their loss in income when they are required to attend court as witnesses," said Ms Tan.

She thanked Dr Keating and his friends for helping the cabby and bringing the matter to ComfortDelGro's attention.