Man allegedly performed lewd act on bus while staring at girl, stopped from fleeing by commuters 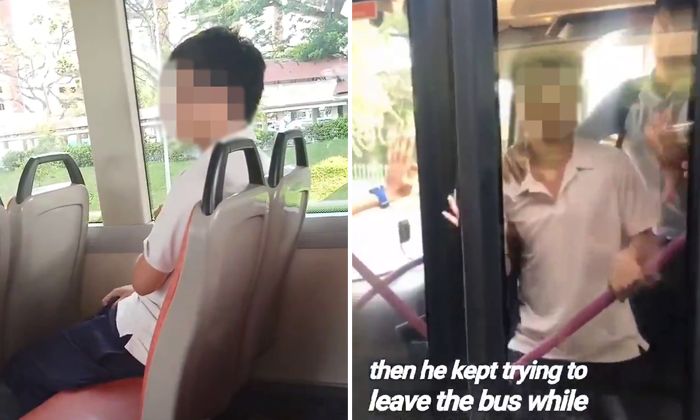 A man was caught on camera performing a lewd act while seated on a bus and then trying to flee -- only to be stopped by other commuters.

Twitter user Kurt Mikhail Yang told Stomp that he witnessed the incident on board SBS Transit service 72 on July 1, at around 5pm.

A video that Mr Yang tweeted shows a man touching himself inappropriately while seated on the upper deck of the bus. He was allegedly in the act while staring at a secondary school girl.

According to the girl, the man had initially sat beside her but moved after she told him to leave.

Mr Yang told the girl to follow him downstairs and called the police.

The bus captain stopped the vehicle outside Nanyang Polytechnic and shut its doors to prevent the man from fleeing.

Mr Yang said he also "blocked" the man from getting near the girl by standing in between them.

Realising that he was trapped, the man apparently started screaming that he wanted to get off the bus and did not wish to go to jail.

Another video that Mr Yang tweeted in the same thread shows the man trying to pry open the bus door and escape, though he can be seen being pulled back by another commuter.

The bus driver also helped to detain the man while passengers started alighting from the vehicle.

Mr Yang said: "He kept trying to leave and the girl was seriously damn frightened. We had to forcefully keep him in the bus like damn annoying he kept trying to break the door or some shit."

Mr Yang added: "The girl's family came down and thanked me for helping them. The girl felt a lot better after the situation was dealt with and I'm glad she's okay."