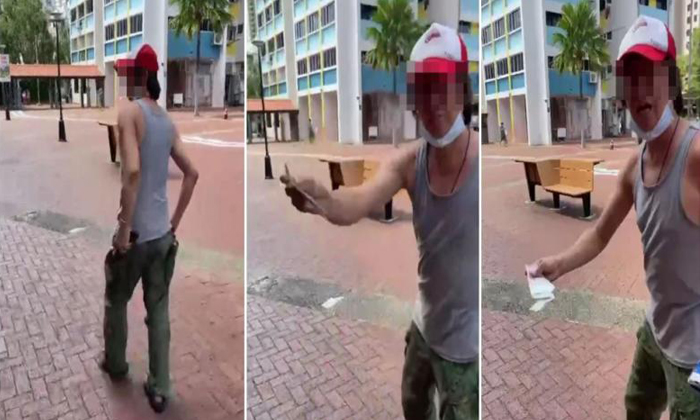 A Singaporean woman had a bizarre and disturbing encounter in Toa Payoh on Sunday (Jan 23) when a man approached her and offered her money to don a bikini.

The woman was walking with her boyfriend and a male friend in Toa Payoh Lorong 4 around 2.30pm when the man walked up to her and waved $2 bills in the air, saying: “Wear bikini, I have money.”

He appeared to be in his 30s or 40s, donned a cap, and wore his mask below his chin.

When the woman ignored him and walked away, the strange man strode alongside her for a while and persisted: “Got money. I give you la.”

Later on, the man’s behaviour got even more bizarre when he shouted “Majulah Singapura!”, followed by a Hokkien expletive.

The woman shared her encounter with MS News and said she was shaking with anger at the time.

“Not only was he harassing me on the streets, but he was also not wearing a mask correctly. That’s against Covid-19 measures,” she said.

“I wasn’t exactly worried he would attack us because my boyfriend was there. But I was afraid he would touch me inappropriately.”

She said she filmed the incident to raise awareness and will lodge a police report, adding: “I’m particularly worried for girls who may encounter this guy in Toa Payoh.”

Related Stories
Bedok resident calls police again after neighbour 'harasses' her once more
Police called in after biker refuses to give way to pedestrian then points middle finger at her
Duo taunt and 'attack' couple during parking dispute in Yishun, all 4 assisting with police investigations
More About:
harassment
pervert
unusual