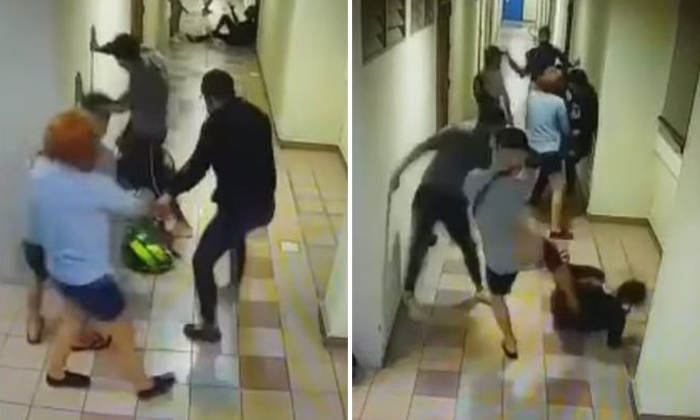 A secret society member repeatedly slashed a youth with a knife in a brawl that took place in Chinatown on May 10.

A video of the incident, which was captured on closed-circuit television, was widely shared on social media and WhatsApp group chats.

It shows two groups of people fighting along a corridor on the 16th storey of Block 101 Upper Cross Street, People's Park Centre.

The victim, Muhammed Shazryl Hykel Abdullah, 19, suffered injuries including slash wounds on his back and was rushed to Singapore General Hospital.

Noor Najat Alwi - one of his attackers - pleaded guilty in a district court on Thursday (Oct 22) to two counts of rioting while armed with a deadly weapon and being a member of an unlawful society.

The Singaporean, who will turn 21 on Saturday, also admitted to an offence under the Covid-19 (Temporary Measures) Act.

During the circuit breaker from April 7 to June 1, people were not allowed to leave their homes without a valid reason or meet others from different households to socialise.

The court heard that a man identified as Muhammad Roslan Mohamed Rumli, 28, and his girlfriend, known only as Kira, met another woman called "Akai" in Selegie Road on May 8.

Kira later followed Akai home and Roslan video-called his girlfriend the next day.

He noticed that Kira behaved "suspiciously" and refused to reveal her whereabouts. Shortly after, somebody snatched away her phone and ended the call.

Roslan called Akai, who told him that she had been with Kira at the People's Park Centre's flat with a group that included Hykel.

Akai claimed that one of them later chased her out for an unknown reason, leaving Kira behind. Worried, Roslan contacted his friends, including Noor. Their group of five arrived at the flat at around 3am on May 10.

Akai later texted Roslan a personal identification number to key in at the door and his group entered the unit.

They assaulted two men who were inside and one of them used his phone to tell Hykel, who was out, about what was happening. Hykel gathered his friends and his group, also of five men, arrived at the unit at around 3.30am.

A brawl soon broke out between the two groups and Roslan dragged Kira out of the unit. Court documents did not state what she had been doing there.

Deputy Public Prosecutor Jasmin Kaur said that during the brawl, Noor slashed Hykel with a knife before fleeing the scene.

The police were alerted about the fight and officers later found Hykel lying behind a pillar in a carpark, bleeding profusely from his wounds.

Offenders sentenced to reformative training will be detained at a centre to follow a strict regimen that includes foot drills and counselling. Noor will be sentenced on Nov 12.

For each count of rioting with a weapon, an offender can be jailed for up to 10 years and caned.

Related Stories
Last suspect of Chinatown rioting case arrested, along with man who harboured him
Fourth man charged over alleged involvement in Chinatown riot
3 men charged over Chinatown riot: 1 was out on bail when he took part in brawl
Chinatown riot arose from dispute over woman, another 9 suspects arrested
3 arrested, 1 taken to hospital after riot involving parangs at Chinatown: Police manhunt ongoing
More About:
slashing
court