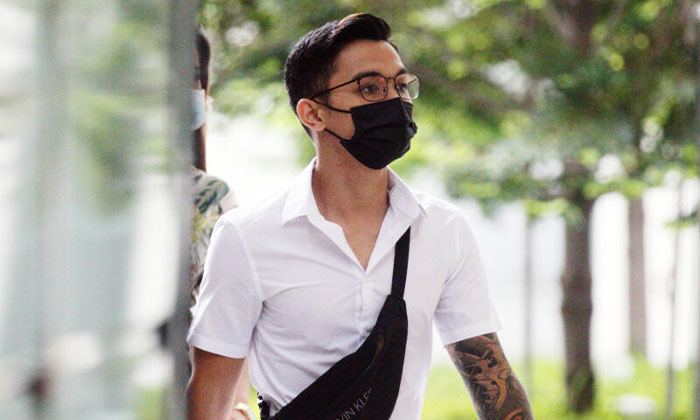 In what the prosecution described as "one of the worst attacks on police officers to date", an odd-job worker and his twin brother rained blows on a policeman, inflicting a traumatic head injury.

Muhammad Fiqkri Jaffri, who was later arrested and handcuffed, then headbutted another officer and fractured his nose.

While Fiqkri was in the rear passenger seat of a police fast-response car, he kicked a door and caused it to be misaligned. The repairs came up to more than $1,200.

The 28-year-old man pleaded guilty on Thursday (April 7) to two counts of voluntarily causing grievous hurt to a public servant.

He also admitted to one count each of vandalism, criminal intimidation and being a member of a secret society.

In June last year, his twin brother, Muhammad Farhan Jaffri, was sentenced to 33 months and four weeks' jail, three strokes of the cane and a fine of $3,500.

The Singaporean brothers were sharing a bottle of whisky shortly before the incident on Feb 23, 2020.

When Farhan's wife reached home that morning, the couple had an argument at the void deck of Block 755 Jurong West Street 74 at around 4am.

Soon after, the police were alerted to the commotion. Four officers, including Sergeant Chong Jia Wei, 27, and Staff Sergeant Tity Sumarni Abd Ghani, 35, arrived at the scene.

When Staff Sgt Sumarni asked the couple if they were all right, Farhan hurled vulgarities at the policewoman. Fiqkri, who lived in the block, then turned up at the scene.

Deputy Public Prosecutor Dwayne Lum told the court: "(Fiqkri) immediately approached the police officers aggressively and pointed his finger in (their) faces while demanding to know what was wrong as they were speaking with Farhan.

"At the same time, the accused told Farhan and his wife to go back to his unit located on the second floor, while gesturing aggressively at the police officers and telling them to 'zip' their mouths and 'shut up'."

Farhan again abused Staff Sgt Sumarni with vulgar language before leaving the scene, only to return minutes later. He then told Fiqkri that he did not like Sgt Chong's face.

Both brothers then assaulted Sgt Chong, causing a serious head injury, until two other officers managed to restrain Farhan while Staff Sgt Sumarni struck Fiqkri with her baton.

Instead of cooperating, Fiqkri taunted Staff Sgt Sumarni and told her he was a secret society member.

Two more officers, including Sgt Chen Jian Da, 28, soon arrived, and Fiqkri was arrested. Despite being handcuffed, he headbutted Sgt Chen in the face.

The two injured officers were taken to hospital. Sgt Chong spent two days in a neurosurgery ward and was given 29 days of hospitalisation leave, while Sgt Chen was given five days of outpatient sick leave for a fractured nasal bone.

Fiqkri will be sentenced on May 23.

For each count of voluntarily causing grievous hurt to a public servant, an offender can be jailed for up to 15 years and fined or caned.