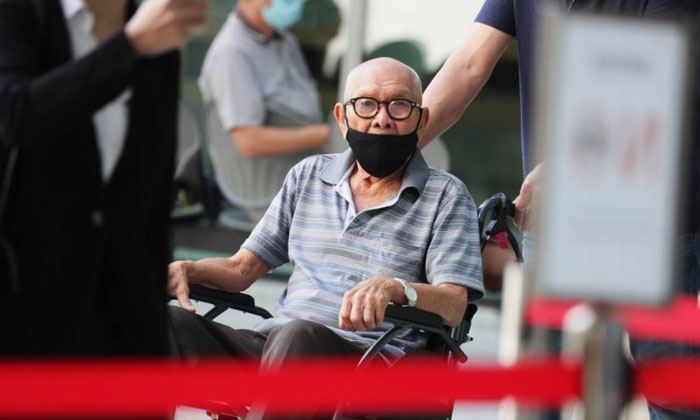 An elderly recalcitrant offender, who has been in and out of jail since 2018 over multiple counts of molestation, is back behind bars for molesting two people, including an 11-year-old girl.

Poh Seng Khian, 86, who is also hard of hearing, had been sentenced to 18 weeks' jail last year for a similar offence.

He did not learn his lesson after his release and pleaded guilty on Wednesday (July 28) to two molestation charges. The Singaporean was then sentenced to 10 months' jail.

Poh, who was unrepresented, had earlier pleaded for the court to sentence him to a fine, adding: "I'm old and about to die."

He appeared in court on Wednesday in a wheelchair, but was not using one when he committed his latest offences.

He was sitting in bus service number 30 on Oct 23 last year when he targeted a 27-year-old woman, who was standing beside him.

Poh touched the victim's arm about five times and she shifted back slightly as she assumed that the touches were accidental.

Deputy Public Prosecutor Lim Woon Yee said: "In total, the accused touched (the woman) on her left bicep repeatedly for about 15 seconds, before he slowly got up from his seat with the help of his walking aid.

"After which, the accused stood on the small step near the victim while holding his walking aid in his left hand."

Poh then pretended to fall and used his hand to stroke her right inner thigh at around 1.30pm.

The woman grabbed his forearm and he apologised to her. She lodged a police report after she alighted.

He then placed the handle of his walking aid on her lap and molested her.

The shocked girl immediately shoved his hand away and removed the walking aid from her lap.

She got off the bus and told her mother about what had happened.

The woman took her daughter to Jurong Neighbourhood Police Post to lodge a report.

For molesting a child below 14 years old, an offender can be jailed for up to 10 years and caned. Poh cannot be caned as he is over 50 years old.