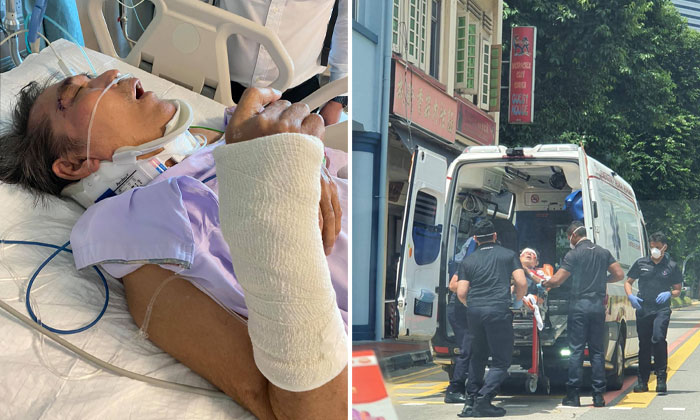 A 68-year-old man was taken to hospital with serious injuries after the bus he was travelling in braked hard to avoid a car that cut into its lane along North Bridge Road on Wednesday (Sep 8).

The police told Stomp that they were alerted to the incident at 11.46am and that a 43-year-old male car driver was arrested for careless driving causing grievous hurt.

She shared that her dad had boarded bus service 175, operated by SBS Transit, after visiting an NKF Dialysis Centre along Upper Boon Keng Road.

Following the accident, she said he suffered a head injury that caused bleeding in his brain. His lung was also punctured from his fractured rib cage and he received several stitches for a cut on his right eyebrow.

She added that his hands, neck and shoulder suffered fractures too.

She said: "His blood pressure is very high now and due to the bleeding in the brain, he is in a very confused state. He do[es] not recognise me at all. He is also not alert at all now."

"We are sorry to learn of Mr Siah's injuries sustained on board Service 175 on Wednesday, 8 September 2021 and are in touch with his family.

"We were unable to contact Mr Siah's family earlier as we did not have their contact details.

"We were able to only contact them late last night after we received an online feedback alert at 10.45pm.

"We called them to make contact and to let them know that we were expediting our investigations and would get back to them in the morning, which we did.

"We remain in close communication with them during this difficult period.

"Based on our CCTV footage, our bus was travelling straight along North Bridge Road when a car in the next lane suddenly cut into our bus’ lane and brushed against its front.

"To avoid an accident, the Bus Captain immediately applied the emergency brakes.

"At this same time, Mr Siah, who was seated right on the first seat near the front door, had just stood up from his seat in preparation to alight.

"He lost his footing as result of this and was thrown forward.

Our Bus Captain immediately stopped the bus and contacted our Operations Control Centre which summoned an ambulance that conveyed Mr Siah to hospital.

"We have shared the CCTV footage with the Traffic Police which is looking into the incident.

"Our thoughts are with Mr Siah for a full recovery.