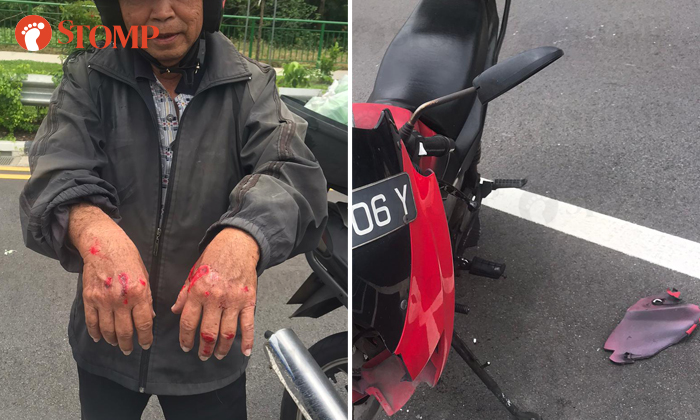 A 67-year-old motorcyclist was taken to hospital after an accident with another bike along Lornie Highway on Monday afternoon (Apr 6).

In response to a Stomp query, the police said they were alerted to an accident involving two motorcycles along the highway, towards Adam Road, at 1.16pm.

A 67-year-old male motorcyclist was conscious when taken to Raffles Hospital.

Stomper Alvin Sin, a taxi driver who was passing by, said he stopped to help.

He told Stomp: "I saw an uncle with blood on his hands after he was hit by another motorcycle.

"I jumped out of my taxi to help him to one side of the road before calling the police and ambulance. I then waited with him till the ambulance came."

In February this year, Stomper Alvin Sin also shared how he helped extinguish a lorry fire at Turf Club Avenue.

Related Stories
Cabbies and bus driver help to extinguish lorry fire at Turf Club Avenue
Motorists help rider to side of road after he skidded and fell on PIE
Heroic doctor helps yet another injured biker, this time at Lower Delta Road
More About:
accident
biker
motorcycle