Man, 61, arrested for drink-driving after 2 lorries collide in Yishun 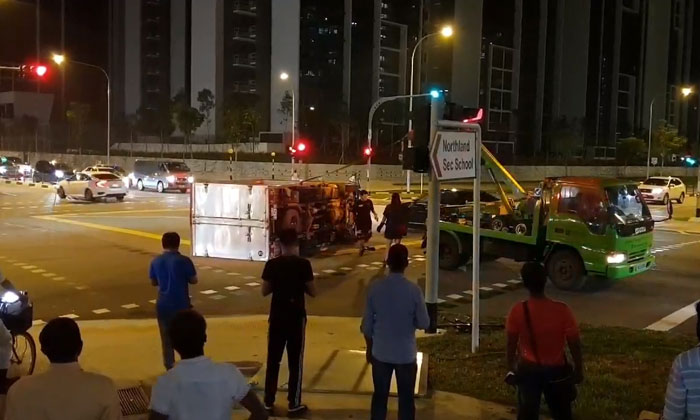 A 61-year-old man was arrested for drink-driving after two lorries were involved in an accident at the junction of Yishun Avenue 6 and Yishun Avenue 9 on Sunday (Sep 9).

A Singapore Civil Defence Force (SCDF) spokesman told Stomp that they responded to the accident at 7.50pm.

A man in his 20s refused to be taken to hospital, SCDF said.

Facebook user Mohd Shaib posted a video in SG Road Vigilante's group where one of the lorries is seen toppled over on its side as it is being hooked up to a tow truck.

The Straits Times understands that one of the lorries was travelling on Yishun Avenue 6 towards Yishun Avenue 1, and was making a right turn into Yishun Avenue 9 when the accident happened.

In response to a Stomp media query, the police said that they were alerted to the accident at 7.51pm.

"One of the lorry drivers, a 61-year-old man, was arrested for drink-driving," a spokesman said.

Related Stories
Istana crash that killed 2: Driver had consumed alcohol and was pursued by 3 cars after dispute in club
Driver nearly collides with police car, uncooperative when arrested for suspected drink-driving
"Influencer" brags about getting driver drunk in Bali on Instastory
More About:
Accidents
lorry
drink-driving
arrested