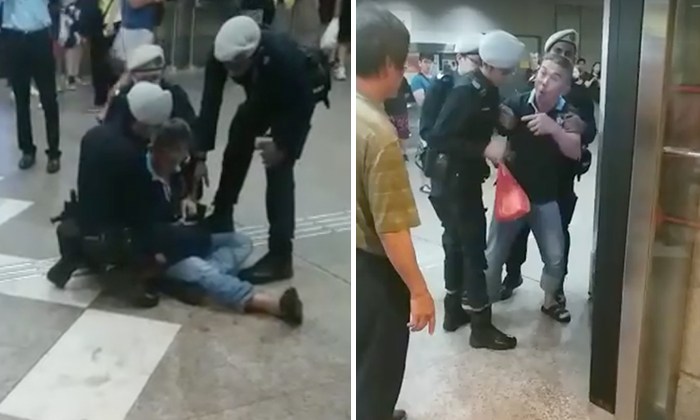 A 52-year-old man was arrested after he used criminal force on a police officer when he was asked for his particulars.

A video of the incident which happened at Lavender MRT Station on Saturday (Nov 11) at about 12.30pm, was captured by a Facebook user, Justin Lee and uploaded online.

In the video, the man could be seen being subdued by three police officers.

Throughout the process, the man shouted in Mandarin that he wanted to call the police as he used his phone.

He also asked the officers to pass him his bag.

A passerby told the officers that they should bring the man back to a police station, to which the man responded by saying that he had just been discharged from Singapore General Hospital.

The passerby retorted by saying that Singapore is a place of law, and anyone who broke the law would be arrested, even if he was the 'president or prime minister'.

The Straits Times reports that the man allegedly refused to cooperate when three officers who were on a routine patrol asked for his particulars.

He then forcefully pushed one of the policemen.

This was supported by Justin's account of the event, who said that the officers had asked the man 'very politely' for his identification card.

Said Justin: "But the uncle got agitated and started shouting 'I pay taxes' in Mandarin, along with a lot of vulgarities for about five minutes.

“When one of the officers tried to take the IC from him, he pushed the officer away and shouted 'robbery'.

"That was when the other two officers pinned him down and I took out my phone to film it.

"I really respect the officers. Throughout the entire incident, none of them raised their voices. They were all very calm."

In an official statement, the Singapore Police Force (SPF) said: "The police confirm that during a routine patrol at Lavender MRT station on 11 November 2017 at about 12.30pm, a 52-year-old man was arrested for using criminal force on a police officer and for refusing to provide his particulars.

"The man was uncooperative when the police officers requested for his particulars.

"He then forcefully pushed one of the police officers.

"The SPF takes a serious view against persons who obstruct police officers from carrying out their duties or cause them physical and verbal harm.

"Any person convicted of using criminal force to deter a public servant from discharge of his duty can be jailed for up to four years and/or fined."