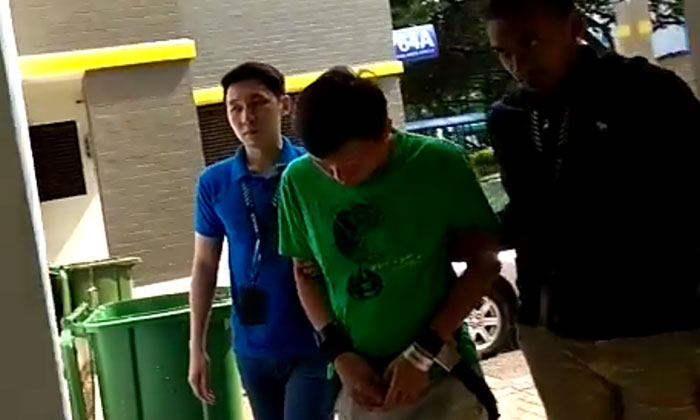 A 49-year-old man has been arrested for allegedly shooting metal pellets at a wedding convoy in Woodlands on July 1.

It was previously reported that the incident took place at Block 762, Woodlands Avenue 6, at around 7am on July 1.

Metal pellets were found on a service road near the block, and no injuries were reported.

The suspect was questioned by the police in his home at Block 764A, Woodlands Circle yesterday afternoon (July 19).

Police also seized two packets of ball bearings, a bottle of plastic pellets, a packet of slingshot bands, a catapult and a toy tank capable of shooting projectiles from the suspect's home.

The Straits Times understands the suspect to be Samuel Tan Joo Soon, believed to have shot the pellets using a catapult from his 5th storey flat on the day of the incident.

A neighbour who declined to be named said that the suspect, who appeared to have been unemployed for five to six years, lives with his wife and 10-year-old daughter.

She said: "We were asleep when the incident took place. The police came by on the day (of the incident) to check out the view from our flat. His front door is usually open around 6am."

Dressed in a green T-shirt and bermudas, the suspect was taken back to the scene of the crime yesterday.

The police added that the suspect’s alleged offences are the possession of an item of arms without a licence, committing a rash act, mischief and possession of a dangerous instrument.

On the day of the incident, seven best men drove five cars there to escort the bride.

One of the bridesmaids heard a shooting sound, while they were downstairs playing the gatecrashing games.

The best men then realised that two of the cars had been damaged by pellets.

Airlift guns or any other gun which shoot pellets using compressed gas are regulated as arms under the Arms and Explosives Act, said the Police.

If found guilty of possession, the suspect may be fined up to $5,000 for every gun and be jailed up to three years.

If found guilty of mischief, he may be jailed up to two years and fined.

For committing a rash act, the suspect may be jailed up to six months and fined up to $2,500.