Man allegedly stabs his chest after locking himself in Clementi flat, arrested for attempted suicide 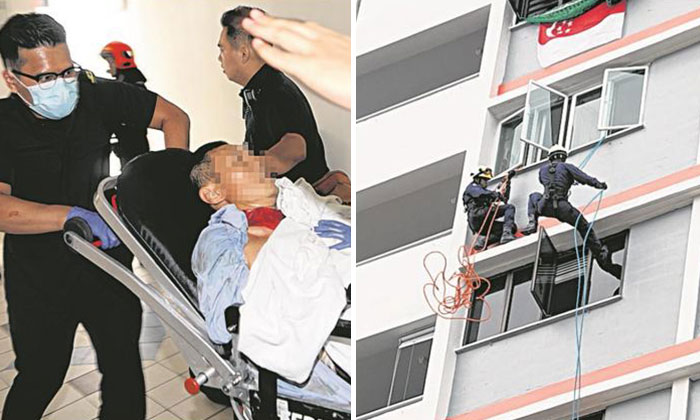 A man allegedly stabbed himself in the chest with a knife after locking himself in his flat, prompting police officers to break into the unit and seize his weapon.

The man was then rushed to a hospital for treatment.

Lianhe Wanbao received a tip-off by a reader and rushed down to the scene, where they saw Singapore Civil Defence Force (SCDF) officers by an inflated life-pak on the ground floor. There were also police officers at the scene.

Amidst the tense atmosphere, reporters heard many loud bangs, believed to have been made when police officers conducted a forced entry into the unit.

Two SCDF officers were also seen setting up a net from the 10th storey. Two other officers rappelled down to the 8th floor to ensure that the man’s kitchen windows were closed so that he would not be able to jump down.

Another two SCDF officers were also placed on standby on the 7th storey.

After police officers broke into the unit, reporters heard a man shouting, followed by a period of silence.

Several minutes passed before paramedics emerged from the unit, pushing a stretcher on which the man had been secured. The man was half naked and sported a gauze around his neck which was stained with blood.

The paramedics transported the man to the ground floor and swiftly loaded him onto an ambulance.

Police officers also seized a blood-stained knife and a book during investigations.

According to Lianhe Wanbao, the man allegedly stabbed himself in the chest and cut his wrist.

In response to media queries, a police spokesman confirmed that it was alerted to the case of attempted suicide.

A 47-year-old man was conscious when conveyed to National University Hospital (NUH) for treatment, and he was subsequently arrested by the police.