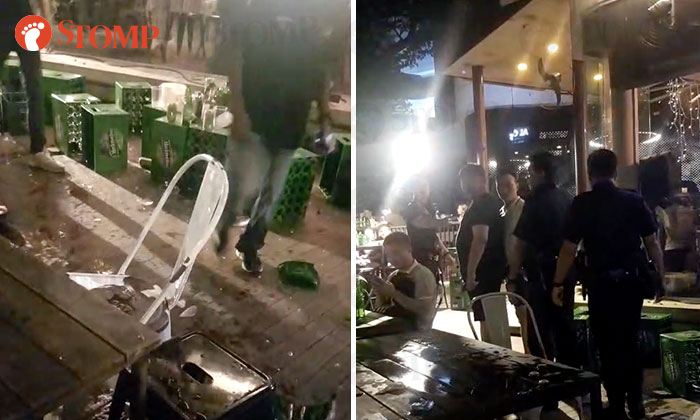 A Stomper alerted Stomp to the incident, alleging that the man had suddenly smashed beer bottles while drinking at the bar, and used the broken bottles to threaten other customers.

Stomp also understands that the man had thrown beer bottles at some customers after an argument broke out. There were no reported injuries.

Videos sent by the Stomper, which Stomp has compiled, show beer crates and debris scattered on the ground. A staffer is also seen clearing a broken ice bucket.

Police officers are also seen leading away two men — a man in a black T-shirt and another in a white collared shirt.

"The man was dangerous, so the police were called."

“On July 29 at 1.57am, the police were alerted to a case of rash act along Orchard Link.

“A 39-year-old man was arrested in relation to the case. Police investigations are ongoing.”

Related Stories
Drunk man argues with neighbour while being naked, also throws ofo bike down 15 floors
Another person leaps onto car at St James -- and this one even lies on bonnet
Uber Eats deliveryman who argued with condo security guard arrested for rash act
More About:
rash act
SPF
bar
orchard