Man hits Merc windscreen until it shatters during dispute at Syed Alwi Road, 5 arrested for affray 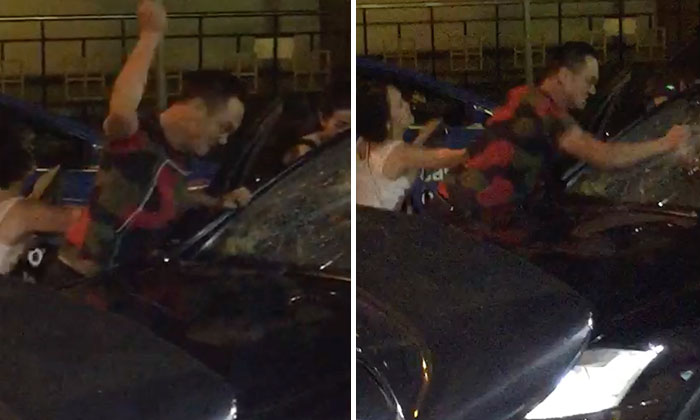 In an official statement by the police, it said that five men have been arrested for their alleged involvement in a case of affray which happened along Syed Alwi Road on March 6, 2018.

Preliminary investigations revealed that the incident had been triggered by a driver sounding his horn at pedestrians who were walking along the road.

A dispute ensued, involving the driver, his two passengers and the pedestrians, during which blows were exchanged.

The identities of the suspects were established by officers from the Central Police Division through extensive ground enquiries, which led to the suspects' arrest on Mar 9, 2018.

The police would also like to inform the public that the offence of affray carries an imprisonment term up to a year, and/or a fine up to $5,000.

A 29-year-old man smashed the windshield of a Mercedes-Benz during a heated dispute at Syed Alwi Road and was subsequently taken to a hospital.

A video of the dispute has been circulating on WhatsApp, with many several readers alerting Stomp to it.

In the video, a group of people is shown embroiled in an altercation at a stall.

Overturned tables and chairs can be seen in the backdrop.

A man and a woman enter a black Mercedes through a rear door, while a man in black gets into the driver seat.

A woman in black then opens the door to the driver compartment, but the man in black quickly shuts it again.

Another man in red is seen being restrained by three others from getting to the man in black.

The man in red suddenly breaks free and starts punching the windshield of the Mercedes, with the impact of his blows cracking the windscreen.

A woman in white tries to restrain him with little success.

The man in black proceeds to drive off while the man is still hitting it.

In response to a Stomp query, a police spokesman said: "On March 6, 2018, at 3.02am, the police were alerted to a case of voluntarily causing hurt along Syed Alwi Road.

"A 29-year-old man was conscious when conveyed to Tan Tock Seng Hospital.