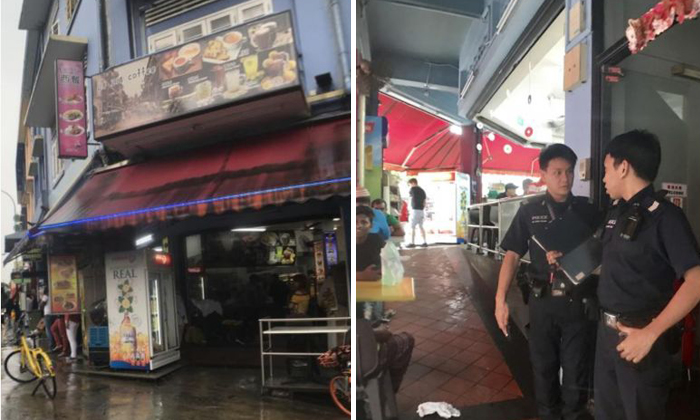 A 29-year-old man was found motionless at 218 Geylang Road after the police were alerted to a fight there at about 7.50am on Friday (June 15).

The man was later pronounced dead by paramedics at the scene.

The police said in an official statement that the incident has been classified as murder and a 30-year-old man was arrested in relation to the case.

According to The Straits Times, the suspect is Sasitharan Ramasamy.

Stomp understands that both the victim and suspect are Malaysian nationals.

The victim was found on the walkway outside a third-floor unit in the four-storey building which contains a coffee shop on the ground floor, and residential units on its upper floors.

A woman who identified herself as the landlady told The Straits Times that she was the one who had called the police.

Stallholders interviewed revealed that they started working in the afternoon and were not aware of the incident earlier.

Mr Malarvanan Subramiam, 61, a regular customer at the coffee shop, said he saw police officers taking the body away just after noon.

He is believed to have suffered injuries to his head, although it is unclear if he had died from the wounds.

The suspect will be charged in court on Saturday (June 16) and police investigations are ongoing.