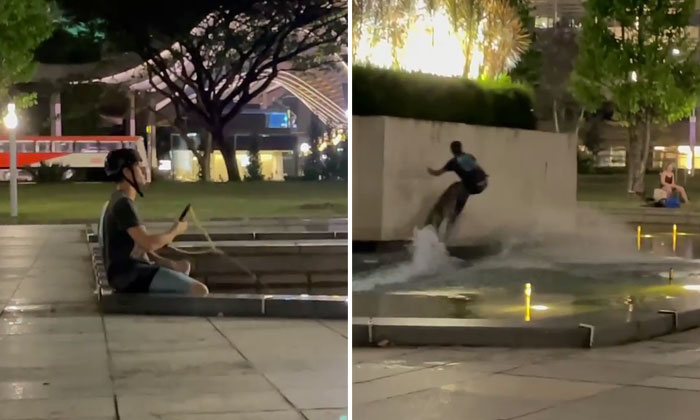 A Singaporean man, 24, who allegedly wakeboarded at the War Memorial Park, was charged in court on Monday (Sept 13) with wilfully interfering with a national monument.

Stephen Kovalkov was charged under Section 22 of the Preservation of Monuments Act with allegedly committing the offence on July 17.

In a joint news release, the Singapore Police Force and National Heritage Board said that the police received a report on the incident on July 18.

Four other people, aged between 18 and 24, are also being investigated for their involvement in the act.

"National monuments are important markers of our identity and highlight key milestones in Singapore's history," the agencies said. "The Civilian War Memorial, a national monument, is dedicated to the civilian victims of the Japanese Occupation. Due respect must be accorded to our national monuments, in particular war memorials, and all acts of disrespect are unacceptable," they added.

A 31-second video of the alleged incident was circulated online in July. In it, a man was seen wakeboarding across the water feature of the park in Beach Road, performing a trick with his board that hit the base of the monument.

The clip received widespread criticism from netizens who called the act disrespectful.