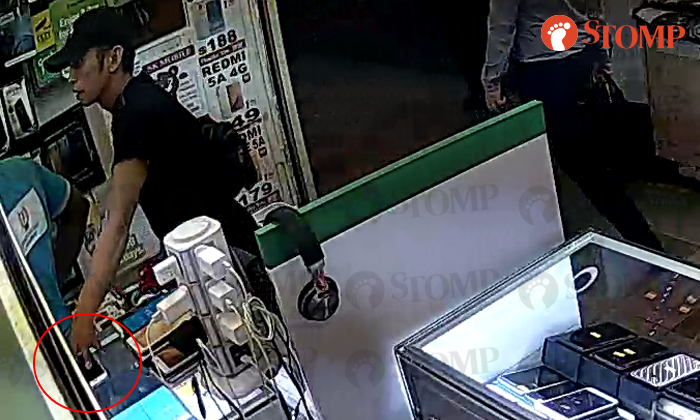 A man was caught on camera stepping into a store, taking an iPhone that had been left on a glass display, and then leaving with his loot -- all in seconds.

The incident occurred at Block 101 Yishun Avenue 5 on Friday night (July 13), at around 9pm.

In the video, the man can be seen entering the store and reaching his hand out towards a phone that was lying on the shop counter.

The man, who was wearing a cap and carrying a sling bag, then took the phone and walked out of the store.

All of this happened in seconds when the shop's staff were busy speaking to other customers in the store and did not appear to have seen the man.

"You can see that he took the phone and then ran away," said Chiang, who also shared videos of the incident on Facebook.

"A 23-year-old man was subsequently arrested in relation to the case," a police spokesman told Stomp.

Related Stories
Here's what can happen if you forget your valuables in a store -- even for mere seconds
Man takes Singaporean woman's phone from JB store after using plastic bag as 'shield'
Man snatches phone worth over $1,000 and dashes out of store at Peninsula Shopping Centre
More About:
stealing
theft
arrest
Yishun