Man, 20, posed as woman on Locanto to cheat victims in over 30 cases of sexual services scam 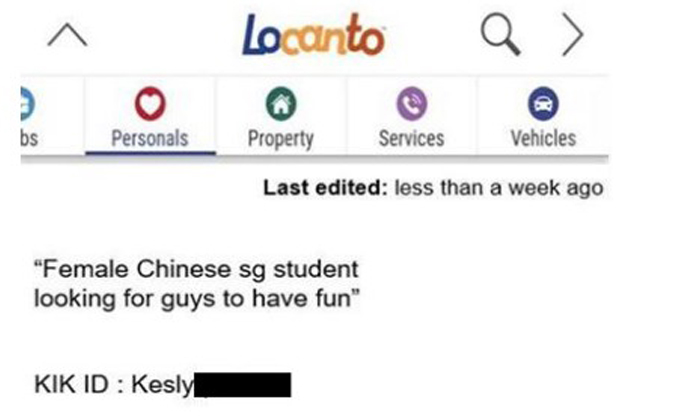 A 20-year-old man was arrested after allegedly posing as a woman online to cheat victims who responded to his advertisement for sexual services.

The police said they received a report on April 6, from a victim who had responded to an advertisement posted on Locanto for sexual services.

"After payments were made via bank transfer, the other party allegedly became uncontactable," the police added.

Through investigations, officers from the Commercial Affairs Department established the suspect's identity and arrested him on Thursday (April 22).

Preliminary investigations revealed that the man is believed to have masqueraded as a woman on online platform Locanto to cheat victims.

He is believed to be involved in more than 30 cases of scams.

The man was charged in court on Saturday with cheating, which carries a jail term of up to ten years and a fine.

The police said they take a serious view of anyone who may be involved in scams, and "perpetrators will be dealt with in accordance with the law."

If you wish to provide any information relating to such cases, please call the police hotline at 1800-255-0000, or submit it online at www.police.gov.sg/iwitness.

For scam-related advice, you may call the National Crime Prevention Council’s anti-scam helpline at 1800-722-6688 or visit www.scamalert.sg.

Related Stories
Man who posed as agent for 'sugar daddies' to trick women into having sex with him jailed, fined
Man arrested for selling virtual game credits on Telegram and going MIA after getting paid
18-year-old woman who allegedly offered nudes but went MIA after payment arrested
More About:
scam
arrest