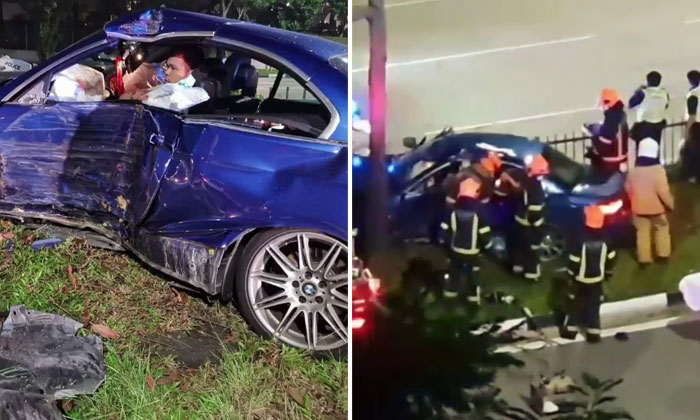 An 18-year-old man was arrested for driving a BMW that did not belong to him without a valid driving licence and other traffic-related offences after a police chase from the Seletar Expressway (SLE) to Punggol Way on Saturday (May 22).

The police told Stomp  Traffic Police officers were patrolling the SLE towards the Tampines Expressway (TPE) at 12am when they signalled for a driver to stop his car along the roadside to conduct a check.

Instead, the driver sped off.

"The officers gave chase and pursuit came to a halt when the car subsequently crashed into a central divider along Punggol Way," a police spokesman said.

"A 21-year-old male passenger was conscious when conveyed to the hospital.

"The driver is also under investigations for driving without a valid driving license, using a motor vehicle without insurance coverage, driving without owner's consent and other traffic-related offences."

A Stomper alerted Stomp to videos of the incident were posted on SG Road Vigilante's Facebook page showing the BMW speeding along the expressway with Traffic Police in pursuit.

There is also footage of the crashed BMW and Singapore Civil Defence Force (SCDF) officers working to rescue the passenger from the car.

Another video shows a man running from the vehicle.

In response to a Stomp query, the SCDF said they were alerted to a road traffic accident near the junction of Punggol Way and Sengkang East Road at about 12am.