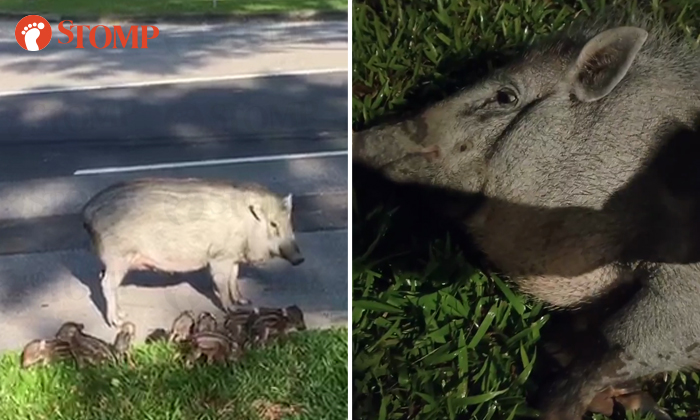 Remember the family of wild boars that got shushed by a passer-by?

A video of the encounter, taken by Stomper Leong and her husband near Jurong Eco Garden on February 18, shows an adult boar with seven piglets.

According to Leong, the wild boars did not react to her and her husband.

In the video uploaded on February 25, Fred can be heard beckoning the wild boar over, calling it "David" and letting the animal sniff his shoe.

Fred then told the wild boar to go to sleep, patting it as it lay down on the grass patch and praising it for being a "good boy".

Similarly, netizens were surprised at how the wild boar did not seem bothered by human presence and even appeared friendly in this case.

Turns out that the adult wild boar in both videos are one and the same, according to Fred.

Fred, who is half-Singaporean and half-Thai, told Stomp that his video was taken near Cleantech Loop on February 12, at around 12.12am.

Asked if there was any reason why the wild boar took to him so warmly, Fred shared: "I didn't train her nor do I feed her. I guess it's just because she recognises me.

"The boars in this area are friendly. Not all but two to three of them. I guess it might be because humans have been feeding them.

"They will listen to humans and one of them is the one I interacted with. It's also the same boar seen with the piglets on Stomp.

"I treat all wild animals just like pets. They are normal to me because I lived with them in the village in Thailand."

Fred said that he has not known "David" long despite the trusting relationship they share, adding: "But I can't find her anymore. I haven't seen her around recently."

Related Stories
Passers-by filming and shushing family of wild boars in Jurong is exactly what not to do
Chonky boar gets stuck between railings, man pats its butt for encouragement
Jogger encounters wild boar up close near Sungei Punggol
More About:
wild boar
wild boars
animals
cute