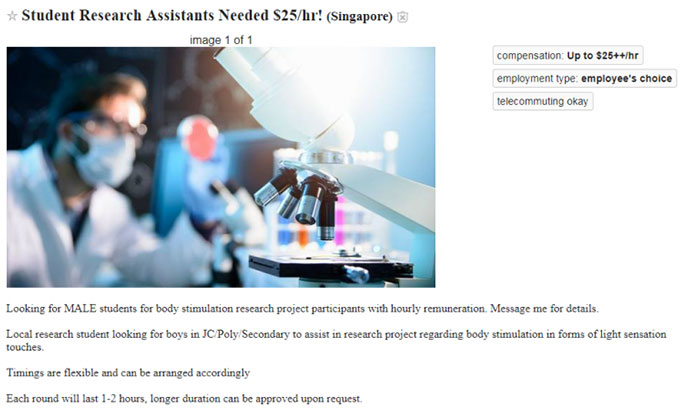 A teenager, 17, was allegedly molested by a Nanyang Technological University graduate student after responding to a Craigslist ad which read, “to assist in research project regarding body stimulation in form of light sensation touches.”

The incident reportedly happened after the teenager met up with the student, 25, at the lobby of NTU graduate hall at around 8pm on Nov 13, 2017.

The student was arrested for the outrage of modesty by the police on Saturday (Jan 20).

It is understood that both the male victim and the accused are Singaporeans.

The teenager told The Nanyang Chronicle that he had come across the ad on Gumtree and contacted the student on WhatsApp according to the number provided in the listing.

He said that the student told him that he would be tickled to gauge his body’s responsiveness to touch.

The student also said that for each article of clothing he kept on during the experiment, there would be money deducted from the payment.

The teenager agreed to the conditions, thinking that he had signed up for an official NTU research project which would happen in the lab.

However, after meeting up on the day of the incident, he was then taken to a dormitory room, where he was instructed to take a shower and come out naked.

He did so and was then blindfolded and restrained to a bed with cloth.

The teenager was restrained for two hours and said that after the student tickled him for an hour, he began stimulating his penis.

The teenager lodged a police report the day after the incident.

When asked why he did not protest the arrangements, he said that the student was ‘a big guy’.

The teenager told The Straits Times:

“It's like sitting on a roller-coaster ride - after it has begun, you immediately regret it but it's too late to leave.

“Honestly, it's partly my fault for being so naive. It was my first time (participating in a study) and I thought since the student was from NTU, it was legitimate and nothing could go wrong.”

Several variations of the ad — a study involving ‘light sensation touches’ — were also posted on websites such as Gumtree, bestfreead and Locanto, listing the contact details of the NTU student.

Under the descriptions, the ads wrote that “light restrain(t)s” would be applied during the experiment, “in order to achieve uniformity in results collection”.

The ads have since been taken down or become expired.

The listings also stated that participants would be promised remuneration of $25 per hour, with an addition $10 per session for subjects below 16 years old.

The ad on Craigslist further called for male participants.

NTU’s Institutional Review Board (IRB), which is responsible for approving research studies involving human subjects conducted by staff and students, told the Chronicle that no such research was listed on their database.

The NTU-IRB confirmed in an email that the student had denied being involved with the aforementioned research study after being contacted by them.

The accused claimed that he did not know who put up the ads and that his number had been listed without his approval or knowledge.

He revealed that he had received calls from interested applicants but had asked an associate chair of his faculty for help to have his number removed from the ads.

In response to the incident, an NTU spokesperson said:

“The University views academic and research misconduct as serious disciplinary offences. We are aware that the police is investigating this case, and we are assisting them in their investigations.”

Related Stories
Malaysian allegedly orders niece to take off clothes and molests her
Man arrested for molesting woman near MRT station
Police looking for man involved in case of outrage of modesty at Tiong Bahru
Cook takes videos of sister-in-law in shower -- then molested her on bed, slapped and restrained her
More About:
molest
NTU
arrest