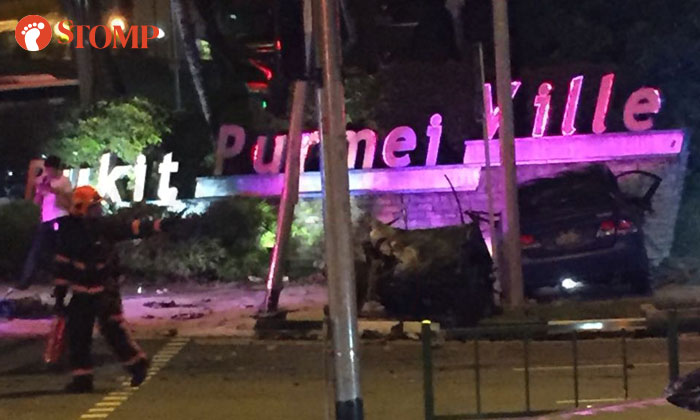 A 26-year-old male driver and his 19-year-old female passenger were taken to Singapore General Hospital (SGH) after an accident involving two cars and a motorcycle happened at the junction of Lower Delta Road and Bukit Purmei Avenue last night (Oct 20).

Stomper Ranvir was at the scene and shared photos and videos of the accident with Stomp.

"We heard a loud bang from our home and rushed to the area," said the Stomper.

"The front of the black car got detached from the main body, the white car and motorbike were also damaged.

"One lady seated at the back of the black car was pulled out easily with the help of SCDF but we could see that there was some blood near her ears.

"There was a guy in front who had to be pulled out by SCDF on a stretcher."

An SCDF spokesman said that two fire bikes, one red rhino, one fire engine, one ambulance and one rescue tender were dispatched to the scene.

A police spokesman informed Stomp that they were alerted to the accident at 10.37pm and that the man and woman were taken conscious to SGH.