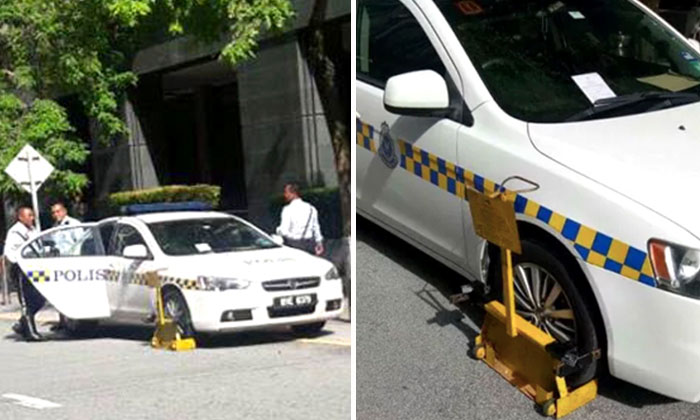 Some Malaysian police officers found out that they were not above the law after a front wheel of their patrol car was clamped for illegal parking.

A photo of the incident which happened in front of Menara Usahawan in Precinct 2, Putrajaya on Wednesday (Dec 27), was uploaded on Facebook and has since gone viral, reports The Star.

The photo showed three uniformed policemen standing around the vehicle, which front tyre had been clamped.

According to World of Buzz, the vehicle beings to the Traffic Investigation and Enforcement Department.

He confirmed the incident and said that the illegally-parked vehicle was clamped by personnel from the Putrajaya Corporation Enforcement Division.

The photo has solicited mixed responses from netizens.

“No one is above the law, even if they’re the traffic police! The personnel who clamped the car should be given a medal!”

Others, however, were less than happy, citing concerns that this would prevent the officers from carrying out their duties.

“They should be given the leeway to park illegally as long as it doesn’t obstruct traffic because they need to get going upon receiving a distress call from the public.”