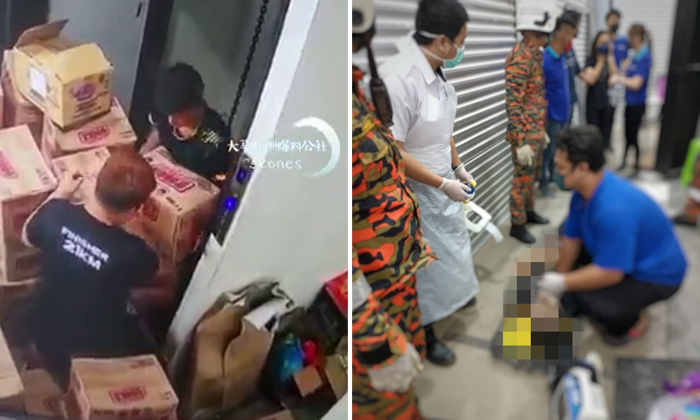 An 18-year-old man in Malaysia died after he fell down an elevator shaft while at work on April 11.

The man, identified as Andrew Munding Kuling, was moving boxes at a supermarket in Bintulu, Sarawak at the time. It was his first day of work at the place.

The incident was captured on a closed circuit television surveillance camera.

Mr Kuling was moving boxes while standing on the roof of a warehouse elevator. He was on the third floor.

After about a minute, the elevator plummeted as he was about to hand the last box to his colleague standing outside the lift.

His colleague looked on helplessly after the lift plunged down.

Mr Kuling reportedly fractured his neck from the fall and was pronounced dead at the scene.

He was extricated from the side of the lift, and believed to have been crushed by it.

Sin Chew Daily reported that the victim was the youngest in a family of three children.

In the article, his mother describes her late son as an obedient boy.

She had not asked him to look for a job, but he took on one to help with the family expenses.

Related Stories
Goreng pisang seller, 74, collapses into wok of hot oil after fatal heart attack in Malaysia
Malaysian actress gets hit in the face by 6kg bowling ball in on-set accident
Firefighter, 24, dies while trying to save woman from jumping off building in China
More About:
dead
death
accident
fatal accident
Malaysia