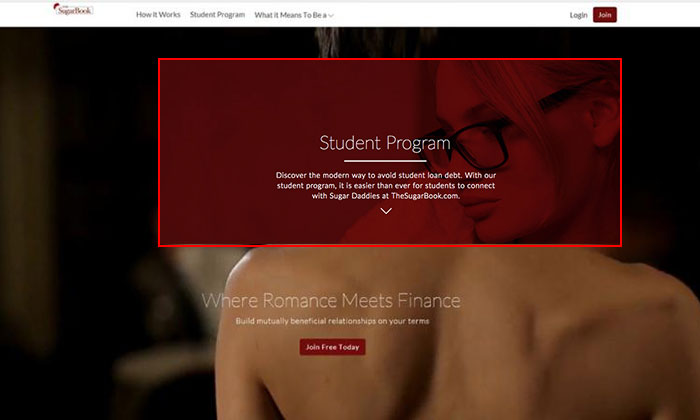 A Malaysia-based dating site, TheSugarBook. has come under flak for its latest campaign to attract university students to register as sugar babies; women who go into relationships for gifts, cash, or other benefits.

Under its new ‘Student Program’ segment, the website states:

“With our student program, it is easier than ever for students to connect with Sugar Daddies at The Sugar Book.”

The website also states that it was offering free premium membership to students who register with their university email addresses and those who are able to provide proof of enrolment, reports Lianhe Wanbao.

A quick check on the website reveals that premium membership costs between $47.92 and $66.59 a month, which are usually paid by members who register as sugar daddies on the site.

The website claims that it draws over 20,000 users in Singapore, and over 70 per cent of its users are women aged between 19 and 35.

Among those are college students, single mothers and divorcees.

It also elaborated that 10 percent of its sugar daddies come from Singapore, which amounts to about 2250 users.

Marine Parade GRC MP Seah Kian Peng, who is also the chairwoman of Government Parliamentary Committee (GPC) or social and family development said that platforms of this nature should not be allowed to reach Singaporeans.

“They could be targeting our daughters or your friends’ children.

“Is this something that we wish for or should tolerate?

“The answer is obvious.”

MacPherson SMC MP Tin Pei Ling who is also deputy chairperson of GPC, said she hopes the authorities would look into the legality of such websites, adding:

“We should not let those profit-seekers capitalise on the vulnerability of our youths and exploit them.”
Yishun GRC MP Lee Bee Wah commented that websites like these can send the public the wrong message, and eventually normalise this phenomenon.

However, she said that she believes that Singaporeans still value morality and will reject the website.

A spokesman for TheSugarBook said that it was not afraid of getting banned, as the platform was designed for ‘mature men and women’, a niche market.

“All users must be 18 or above, and we do not condone illegal activities on our  platform.”

As for claims that that the services provided were immoral, the firm said that the platform was designed to allow like-minded, consenting adults to connect to one another, so they can meet and date in person.

It also encourages users to voice what they wanted.

The spokesman clarified that TheSugarBook is not a website advocating extramarital affairs.

Lastly, the company also verifies the emails and addresses and photos of its members to ensure that there were cases of impersonation.

Related Stories
19-year-old girl's conversation with older guy on BeeTalk takes weird turn when he offers to become her 'pimp' and 'sugar daddy'
25-year-old man asks girl, 19, to be 'friends with benefits' -- and says he will pay her
College girls in Malaysia available for a price at budget hotels
More About:
sugar daddy
relationship
immoral