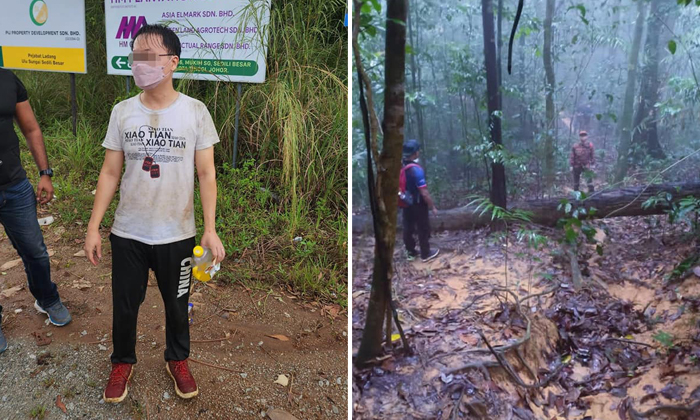 The Malaysian authorities are investigating a 33-year-old Singaporean man who went missing after a hike at the Hutan Panti Forest Reserve in Johor but was later found.

Mr Jason Ren Jie was hiking with his Malaysian friend before he went missing last Saturday morning. He was found by members of the public on Sunday afternoon at a roadside with minor cuts to his body.

In response to The Straits Times' queries, Johor Forestry Department director Salim Aman said on Tuesday that the Malaysian police have handed the case to the forestry department for further investigation.

The man is under investigation for entering the forest reserve without any permission or permit from the Johor State Forestry Department, he said.

"We have started the investigation and the investigation papers will be submitted to the Deputy Public Prosecutor soon for further instruction. This case will be handled in Johor and Mr Jason will be released once the case has been settled," added Mr Aman.

According to an earlier report in China Press, a Chinese-language newspaper in Malaysia, the Singaporean suffered minor cuts on his body and was brought to the Kota Tinggi Hospital for treatment after he was found. He was then handed over to the Johor Forestry Department.

Those who enter the forest reserve without a permit can be fined not more than RM10,000 (S$3,100) or jailed for not more than three years, or both, said Mr Aman.

He said while Malaysian forest reserves, particularly the Hutan Panti Forest Reserve, are open to the public, visitors entering the forests are required under the law to get a permit from Johor State Forestry Department.

Visitors are also advised to hire a local guide for their own safety, he noted.

"We really hope that this case will not affect the relationship between Johor and Singapore, and that it will not (deter) fellow Singaporeans, especially those hikers and bird watchers, to come to Johor to enjoy the beauty and uniqueness of our natural forests," said Mr Aman.

Related Stories
S'porean man, who got lost while hiking in Kota Tinggi, alleged to have broken Malaysian law
14-year-old boys got lost in MacRitchie forest trying to look for hidden shrine
The curious case of 22-year-old woman found injured and 'covered in leaves' after going missing for 3 days
More About:
missing