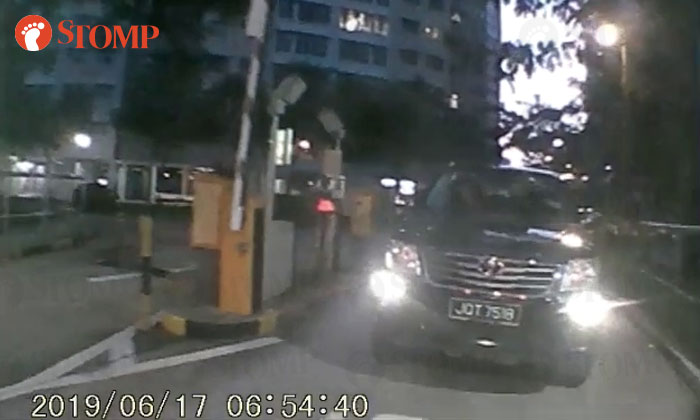 The driver of a Malaysia-registered Toyota has reportedly been tailgating other cars out of a carpark at Woodlands Crescent almost every day for several months.

Stomper D has grown increasingly frustrated with the driver and shared a video with Stomp of one instance that happened on Monday (June 17) at about 6.54am.

"He has been tailgating vehicles almost every single day since October 2018.

"I've already reported this to the authorities but the problem still remains.

"I understand that the Housing and Development Board (HDB) has installed sensors and video cameras to catch drivers who evade parking charges by tailgating but so far, nobody has caught this guy yet."

D told Stomp he hopes someone will put a stop to this: "If it was once in a while, I can close one eye but this is almost every day!"

He added that not only is the driver's actions dangerous, it also is not fair to others who pay for season parking.