Malaysia car driver tailgates auntie's car: Video from daughter shows that she was not jamming on the brakes 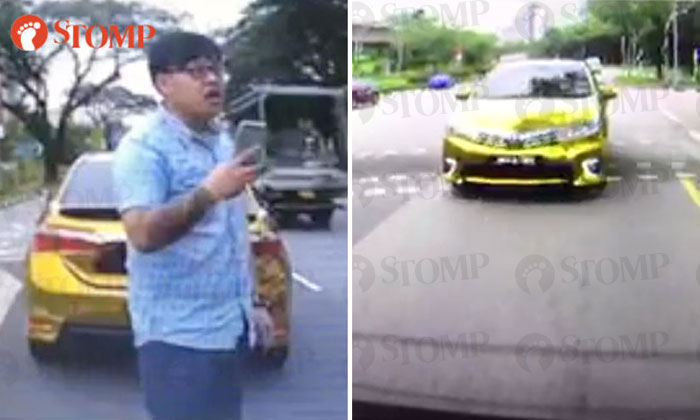 The daughter of an elderly auntie who was involved in a dispute with a driver of a Malaysia-registered car has sent Stomp a video showing what happened prior to the argument.

In an earlier article, it was reported that the driver of the golden Malaysia-registered Toyota had aggressively tailgated the auntie's vehicle before overtaking her, blocking her car and alighting and shouting at her.

According to the timestamp on the video sent in to Stomp by Stomper Eric, the incident took place on Aug 15 at around 1.23pm.

After the article was published, a reader who declined to be named sent Stomp another video showing footage recorded by a dashboard camera on the Malaysia-registered car.

According to the reader, the auntie had been jamming on her brakes, provoking the driver of the Malaysian car.

The daughter of the auntie however, has sent in a third video to Stomp today (Aug 17), challenging the allegations made by the reader.

The video she sent in shows what happened minutes before the argument took place.

Judging from the video, the auntie had been driving on the road without jamming on her brakes. She had only stopped her car at traffic lights.

"An add-on to 'old auntie vs Malaysian car driver', since many netizens wanted to see what triggered the 'tailgate'.

"This so-called old auntie is my mother who is 65 and still very hardworking. She was doing a usual delivery for a customer.

"Bad female driver and playing the breaking game? He (reader who sent the second video) sent a lousy short footage to make my mother look bad? How wise!"

See what happened in the videos below.

The first video sent from Stomp Eric shows the incident from the perspective of the auntie.

The second video shows the incident from the perspective of the Malaysia car driver sent by the anonymous reader.

The third video sent by the auntie's daughter shows that the she did not jam on her brakes before the altercation.