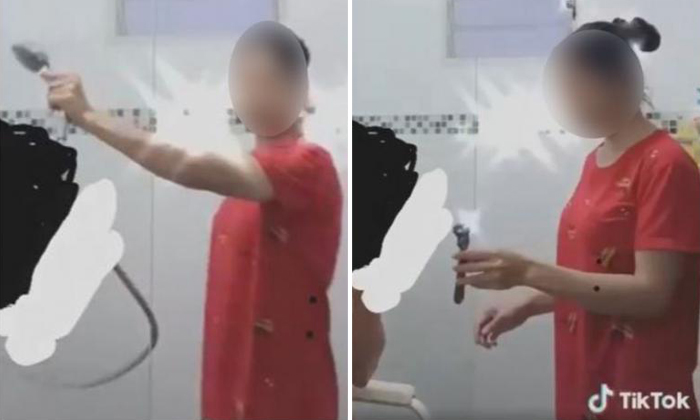 A maid who was tasked to take care of a vulnerable elderly man used her mobile phone to record videos of him in the nude.

The court heard that the Indonesian woman then shared one of the clips with an unknown party via messaging platform WhatsApp.

She recorded a second clip using the video recording function on short video app TikTok installed on her mobile phone.

On Thursday (Jan 27), the 33-year-old was sentenced to 17 months' jail after she pleaded guilty to two counts of recording the victim in the nude without his consent.

She also admitted to two counts of intentionally distributing the recordings without his consent.

The maid, whose name has been redacted from court documents, cannot be identified owing to a gag order to protect the identity of the 74-year-old man.

The court heard that the victim was diagnosed in December 2019 with several health conditions, including multiple brain abscesses.

Deputy Public Prosecutor Foong Ke Hui said: "The victim is, by reason of his physical infirmity, unable to protect himself from abuse, neglect or self-neglect."

The victim's son employed the maid, who started working in their Punggol flat on Feb 1, 2020.

She was with the elderly man in a bathroom later that month when she used her mobile phone to record a video of him in the nude.

In the nine-minute clip, she can be seen staring and smiling at the camera.

The maid later sent the video to an unknown party via WhatsApp.

In January last year, she recorded another clip, about a minute long, when she and the elderly man were in a bathroom.

The prosecutor told the court: "After recording the video... the accused uploaded the video onto (TikTok) using her account. The video was accessible by anyone who had the link to the video.

"The accused claimed that she took down the video from TikTok within an hour because she received several negative comments online criticising her behaviour. However, the accused retained the video recording on her handphone."

An unknown person later got hold of the clip and uploaded it onto Facebook with the victim's image blurred out.

On Jan 3 last year, the victim's son came across the Facebook post. He recognised his father and the maid, and alerted the police later that day.

Related Stories
Maid who posted TikTok video of elderly man in shower arrested for voyeurism
Maid who filmed herself bathing elderly employer, posted video on TikTok to be charged
Maid gets up to 'hanky panky' with man in front of wheelchair-bound employer for 2 hours
More About:
maid
court
Voyeurism
TikTok
inappropriate