Maid who dipped baby's hand in hot water had wanted to work elsewhere, gets jail 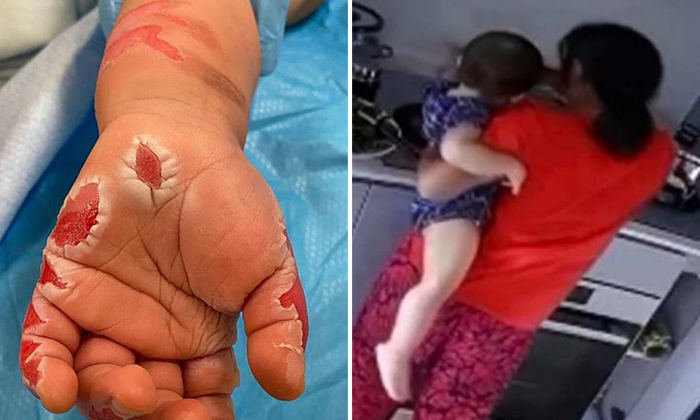 A maid who wanted to work for another household deliberately dipped the hand of her employer's 16-month-old baby into a pot of hot water after finding out that she would have to incur costs for a transfer.

The 30-year-old Myanmar national, who cannot be named to protect the girl's identity, was sentenced on Wednesday (Oct 28) to 14 months' jail after pleading guilty to one count of using a heated substance to voluntarily cause hurt.

The maid started working for the family on Dec 8 last year.

Her job scope included housekeeping and cooking, as well as taking care of the baby and her eight-year-old sister.

After two weeks, the maid decided she wanted to work elsewhere as she did not know how to care for the baby.

She approached her agency but when she learnt that she had to pay for a transfer, she continued working for the family. Court documents did not state the costs involved.

The maid was cooking chicken curry on Jan 14 this year in the family flat in the Buangkok area when the baby started crying at around 5.15pm.

She carried the baby in her arms and continued cooking.

A closed-circuit television (CCTV) camera in the flat captured the maid committing the offence.

In the video, which was played in court on Wednesday, the baby could be heard screaming when her hand came in contact with the hot water.

The victim's sister stepped out of a bathroom when she heard the cry but the maid claimed the baby had placed her hand inside the pot.

The older girl phoned their father, who advised her to apply some aloe vera and toothpaste on the burn. He returned home at around 6.40pm and took the baby to a clinic after seeing the extent of her injuries.

The child was then referred to KK Women's and Children's Hospital where she was diagnosed with having second-degree burns on her left hand.

The Myanmar national initially lied to the girls' parents when they questioned her, claiming that the baby had accidentally touched the pot on the stove.

But the father became suspicious the next day when the maid said that she wanted to stop working for the household.

He viewed the CCTV clip with his spouse and saw the maid committing the offence.

When confronted with the video evidence, the maid finally confessed that she had hurt the baby on purpose. The girls' mother then alerted the police at around 11am on Jan 15.

The baby's wounds were fully healed on Jan 24.

The DPP added: "The victim will suffer a burn scar that will evolve and mature over two years and may still be visible thereafter. However, there is unlikely any impairment of the powers (or) functions of the victim's fingers or forearm."

On Wednesday, DPP Lim pressed for at least 16 months' jail for the maid and told District Judge Ong Chin Rhu that the case involved "a very vulnerable victim".

She told the court that the maid had worked for seven days a week with no days off. Ms Andrew also said that the baby's wounds were not on a vulnerable part of her body.

Offenders convicted of causing hurt with a heated substance can be jailed for up to seven years and fined or caned. The maid cannot be caned as she is a woman.