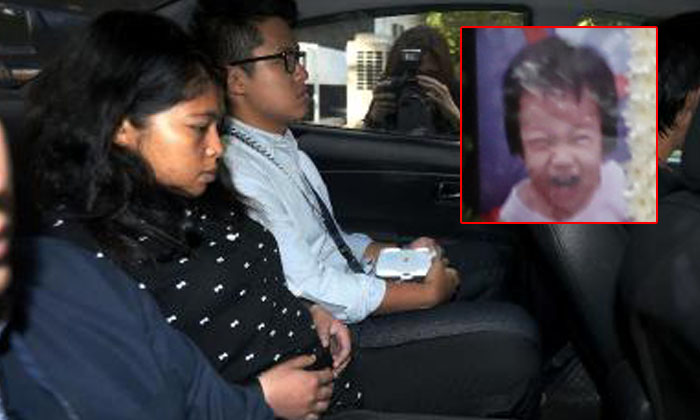 The 25-year-old pleaded guilty to causing the death of the toddler in her care and was convicted in the High Court yesterday (Nov 22) and jailed for seven years.

The maid killed the child by gripping the back of her neck with her left hand and punching and pressing the left side of Richelle's neck with her right fist, the court heard.

She did so until the child stopped crying.

Maryani did this knowing that her actions were likely to cause the girl's death.

Justin Hoo Sheau Peng made clear the law needs to protect vulnerable children violent caregivers, when he was passing the sentence.

Taking into account the aggravating and mitigating factors, the judge added that the sentence should be a signal to deter others.

Dressed in prison garb, the bespectacled and small-built Maryani remained quiet as the judge pronounced the sentence.

Maryani, a divorcee from a humble background in West Java, had worked for the Teo family since January 2015.

She performed household chores and looked after the Teo's two children.

Three months after she started working with the family, it emerged during the hearing that she contacted the maid agency to request a transfer.

However, Maryani was rejected and told to complete her contract.

Mrs Teo also persuaded her to stay on.

Maryani said she was never subjected to ill-treatment and was given adequate food.

However, she claimed to be afraid of Mrs Teo, and said that she was always checking up on her and criticising her work.

So the maid could focus on her job, Mrs Teo had banned her from using a mobile phone.

She said that Mrs Teo scolded her while at a shopping mall a month before the incident, which made her feel humiliated and aggrieved.

Mohamed Muzammil Mohamed, Maryani's lawyer, said in his submissions that unlike her previous employers in Saudi Arabia who were kind to her, Maryani found the experience with her employers in Singapore to be the opposite.

Mr Muzammil argued that there was no pre-meditation and said: "She was driven by anger, frustration and fatigue when she assaulted Richelle."

The Institute of Mental Health psychiatric assessment report showed that her mental condition at the material time had impaired her mental responsibility, he pointed out.

Deputy Public Prosecutors Kelly Ho and Bhajanvir Singh underlined the public interest consideration in dealing with cases involving violence towards vulnerable victims, like the toddler in this case, in their submissions.

They also pointed out that mental condition was an aspect of the case and said "depression cannot be a licence to kill others", citing past cases.

They said that Maryani was motivated by a desire for revenge for what she perceived to be poor treatment by her employer.

Instead of leaving her employment, which they said she could have done and had indeed threatened to do on several occasions, the accused vented her anger against Richelle in "such a heinous way as to cause her death."

"The accused's acts are repugnant and inexcusable."

Maryani's sentence was ordered by the judge to be backdated to May 10, 2016.

Indonesian Embassy officials who were present were granted permission to speak with her at the end of the hearing, at the request of defence counsel.

Mr Muzammil described the sentence as fair outside of the court.

"Maryani genuinely and sincerely apologises to Mr and Mrs Teo and other family members for causing the death of Richelle.

"The guilt will remain with her throughout her life even after she returns to her village to reunite with her family," said the lawyer, who added Maryani wants to serve the jail term and move on.