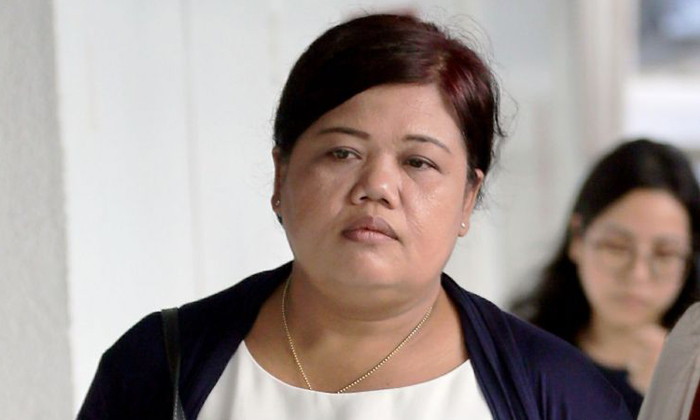 A maid was working for Changi Airport Group chairman Liew Mun Leong and his family when she stole more than $34,000 worth of items from them.

They included luxury watches such as a $10,000 Gerald Genta watch, 115 pieces of clothing worth $150 each, as well as two iPhones with accessories valued at more than $2,000.

After a 20-day trial, District Judge Olivia Low found Indonesian Parti Liyani, 45, guilty of four counts of theft on Wednesday (March 20).  She will be sentenced on Monday.

A fifth charge of being in possession of items, including multiple ez-link cards and wallets which are suspected of being fraudulently obtained, has been stood down for now and will be dealt with at a later stage.

The domestic helper started working at the family's house in Chancery Lane, off Dunearn Road, in March 2007. Her monthly salary was $600 by the time she stopped working for them on Oct 28, 2016.

Judge Low said: "The accused was not badly treated and admitted that she had a cordial relationship with the Liew family, and they often gave her generous red packets on special and festive occasions."

She added that over the years, Mr Liew Mun Leong discovered that items had gone missing from the household and suspected that Parti had stolen them.

He finally decided to terminate her employment in October 2016.

As he was overseas, he asked Mr Karl Liew to oversee the maid's termination and repatriation to Indonesia.

On Oct 28 that year, Mr Karl Liew told Parti that she would no longer be working for the family and gave her about three hours to pack her belongings.

She was also given two to three months' salary as compensation.

Judge Low said: "The accused demanded to know the reason for her termination and got upset with Karl, even to the extent of accusing him of being a very bad person and that God would punish him."

Parti later demanded that he pay for three jumbo boxes of items to be shipped to her home and he agreed.

The maid then left the house without taking the boxes and returned to Indonesia.

Madam Lim later voiced her concern to her husband that it would not be prudent to ship the boxes back to Parti without knowing their contents.

This was because they had to declare the contents of what was being shipped. The boxes were opened and they discovered many of their belongings inside.

A police report was later made after Mr Liew Mun Leong returned to Singapore.

Parti returned to Singapore on Dec 2, 2016, as she wanted to continue working here but was arrested upon arrival. She was charged in court on Aug 31, 2017.

During the trial, the maid testified that she had found Mr Karl Liew's Gerald Genta watch in a black trash bag.

He, however, had said he did not throw it away but later realised that it had gone missing.

On Wednesday, Judge Low said: "There was no reason for Karl to discard such an expensive watch and thus I preferred Karl's version to that of the accused."

Parti also testified that she had found the iPhones in a rubbish bag.

However, Mr Karl Liew said he did not discard the devices, as they were handy as spare phones when travelling.

Madam Lim also testified that Parti had earlier asked her for the phones but she had refused to sell them.

The judge said: "It was simply not conceivable that Karl and Heather would refuse to sell the iPhones to the accused but yet discard the iPhones with the SIM cards still intact."

Parti is out on bail of $10,000. According to earlier reports in The Straits Times, she is now staying at a shelter run by migrant workers group, Humanitarian Organisation for Migration Economics (Home).

Her lawyer, Mr Anil Balchandani, was approached by Home to represent her pro bono.

For each count of theft, she can be jailed for up to seven years and fined.