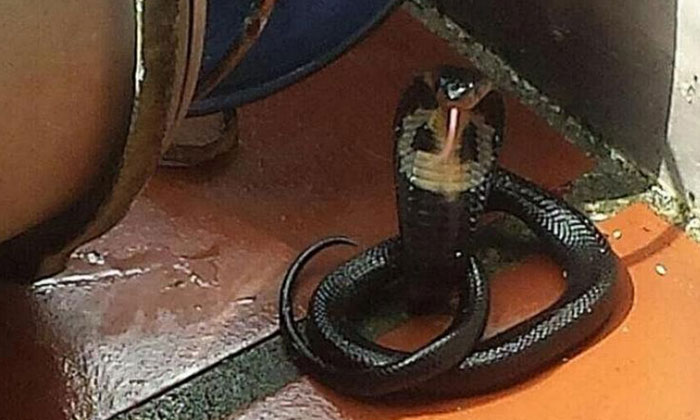 Using a broom handle, a domestic helper killed a deadly cobra after the reptile wandered onto a landed property near Dover MRT Station on Monday morning.

A resident, 19-year-old Carlos Chua told The New Paper that he had warned his family members to stay indoors, and to leash their 12-year-old beagle after spotting the 50cm-long snake behind some plastic pails in the garden.

Said Mr Chua: "It was acting aggressively to anyone who got near it. I knew that some cobras can spit venom, so I did not get any closer."

After Mr Chua left for work at around 8.30am, the family’s domestic helper decided to take down the dangerous intruder on her own.

Identifying herself as Ms Mhelyn, the helper who has been with the family for about 16 years, said: "I felt nervous when I saw the snake. Even though there was no one at home, I was afraid it might bite my employer."

She then tried to chase the cobra out using the handle, but it got more agitated instead.

Said the 48-year-old woman: "I didn't want to kill it at first, but it got angrier and refused to move."

Ms Mhelyn hit the snake repeatedly until it was split into two.

She then disposed of the carcass.

According to the Animal Concerns Research and Education Society (Acres), the snake is an equatorial spitting cobra, also known as the black spitting cobra.

It is venomous, and when threatened, can spray venom from its fangs.

A check on the  Lee Kong Chian Natural History Museum's website also revealed that this species of cobra is usually not aggressive if left alone, but a bite can affect a victim’s nervous system and kill him.

He also advised others in a smilier situation to call the Acres rescue hotline at 97837782, adding: "Attempting to provoke, hurt or kill the snake would only aggravate the situation, which would cause it to be defensive."