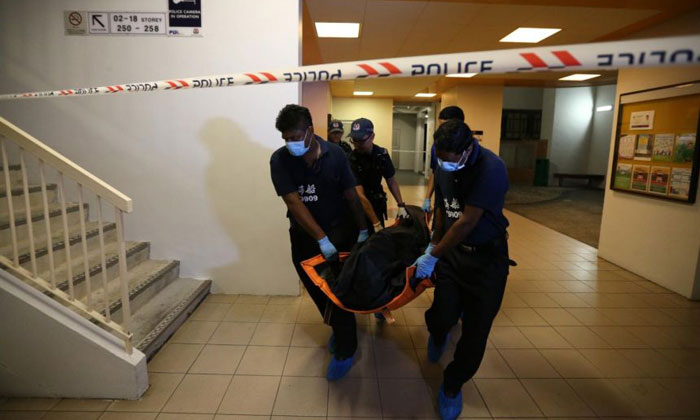 A maid who was allegedly abused by her employer's mother-in-law is said to have grabbed a knife from the kitchen and stabbed the woman 26 times, thereby killing her.

She later loitered in the west of Singapore before going back to the maid agency she was from and was arrested there.

The trial for the murder began on Tuesday (Nov 9), with investigating officer Superintendent Alvin Phua taking the stand as the first witness.

Zin Mar Nwe arrived in Singapore in January 2018 and began working for the family on May 10 that year.

Her passport reflected her age as 23 at the time of the incident, but she later said she was 17. A bone-age test confirmed she was most likely 17 at the time.

Her employer's mother-in-law arrived from India on May 26 that year for a month-long stay with the family.

The family consisted of Zin Mar Nwe’s male employer, his wife and their two teenage daughters.

The deceased, the family members and incident location cannot be identified due to a gag order.

At the time, the elderly woman was lying on the sofa in the living room watching television.

Zin Mar Nwe grabbed a knife from the kitchen and stabbed the woman multiple times, killing her.

She then ransacked the bedroom and broke the lock of a cupboard, taking some money from an envelope inside it.

She washed the knife in the kitchen and left it there before changing clothes and leaving the unit with some cash and an ez-link card that had been placed on top of the microwave oven in the kitchen.

Security camera footage showed she went to the maid agency at Choa Chu Kang at about 12.40pm and tried to get her passport.

But she left after the staff said they were going to call her employer.

The maid went around Singapore, including Jurong East and Bukit Merah, before taking a taxi back to the maid agency at around 5.30pm.

She was arrested there after the staff alerted the police of her return.

The taxi driver who drove her to the maid agency found a plastic bag containing about $114 in cash left on the rear passenger seat.

Forensics later found that four of the notes in the bag were stained with the maid’s blood.

On Tuesday, Supt Phua told the court Zin Mar Nwe had claimed she was abused by the victim, who allegedly hit her on her back and head, sometimes using crockery.

She also recounted an incident to the police when the victim had allegedly kicked her in the chest while she was cutting the older woman's toenails.

The purported trigger point was when the victim told the maid that she would be sent back to the agent the next day.

Zin Mar Nwe had told the police she felt very angry and her mind went blank as she grabbed the knife.

Forensics later found her blood at the scene.

The court was also told the maid was in debt of about $3,300 after getting employed through the agency.

But Supt Phua said while it was a vicious and violent attack, money did not appear to be the motive as the victim’s valuables and the jewellery she was wearing were found at the scene.

The second witness to take the stand on Tuesday was then Inspector Leong Lim Chee, who left the Singapore Police Force in September 2018.

He had spoken to the maid after she was arrested, and described her as being timid but calm.

He added that during subsequent interactions, she was forthcoming and appeared to be less timid.

The trial will continue on Wednesday with six witnesses expected to take the stand.

Deputy Public Prosecutors Kumaresan Gohulabalan and Sean Teh said they would lead evidence from 63 witnesses to prove the single charge of murder against the accused.

If convicted of murder, the maid faces the death penalty or life imprisonment.