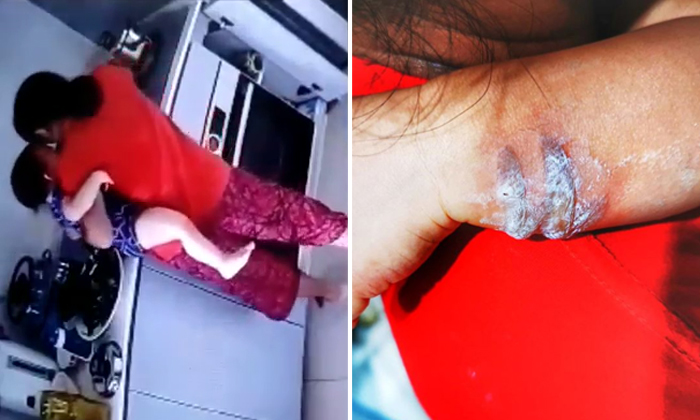 A foreign domestic worker who allegedly scalded a 16-month-old toddler on purpose so that she could return home to Myanmar has been arrested.

The police told Stomp that they were alerted to a case of voluntarily causing hurt by dangerous means at Block 992B Buangkok Link on Jan 15, at around 10.50am.

"A 30-year-old woman was arrested in relation to the case," said a police spokesman, adding that investigations are ongoing.

Accounts executive Amy Low, 40, shared distressing photos of the injuries that her daughter suffered in the incident that occurred in her Buangkok home on Jan 14.

She and her husband had both been out at work that afternoon, leaving their Burmese maid at home with their two young daughters.

The maid has been employed by Ms Low since Dec 7.

Ms Low recounted in a Facebook post: "At 5.20pm, my eight-year old daughter called my husband up and told him that my 16-month-old daughter had suffered a burn.

"We were shocked and rushed our girl to a nearby clinic, but the doctor thought it was too serious a burn wound and hence referred us to the hospital's emergency department instead."

Ms Low and her family were at KK Women's and Children's Hospital from 8pm to 2am, she told Stomp.

The child received outpatient treatment and her wounds are currently in bandages.

According to Ms Low, the maid, who had been instructed never to bring the kids into the kitchen, explained that it was an "accident" when questioned about the mishap.

The maid claimed that she had been carrying the toddler while cooking in the kitchen and that the girl had "touched the pot by herself".

Ms Low said she chose to believe the maid "even when the doctor at A&E had some doubts in the cause of the burn wounds".

Things took an even odder turn the following morning, when the maid "packed all her belongings and insisted to go back to the agency".

This was despite Ms Low's assurances that she could stay on and continue working, and that nobody blamed her for the incident.

Ms Low then spoke to the maid's agent, who said that he would get someone to pick up the maid.

However, she felt something amiss and decided to check the footage on her home's CCTV camera.

"And what I saw was horrifying," said the distraught parent.

"The maid, she did it on purpose! It was never an accident! She took my daughter’s hand and dipped her hand inside a boiling pot.

"I was shaking throughout and made a police report immediately.

"While waiting for the police, I notified the agent of what had happened. The agent started to be agitated and insisted that we should return the maid to agency and end it just like that."

In the CCTV footage, the maid can be seen carrying the toddler with one arm while cooking at a stove.

She then appears to bring the girl closer to the stove, before dipping the child's hand in a pot of boiling meat and causing her to cry.

Ms Low said she then questioned the maid about her actions.

"She said she wants to go home, she said that her friends taught her to do it, so that she could go home," recounted Ms Low.

"And when I asked if the agent was also involved, she said yes – he said that I could go home if I do this! How horrifying!"

According to Ms Low, the maid had expressed her wishes to return home two weeks ago "but all was settled after the agent met and spoke with her".

In her post which has since garnered over 13,000 shares, Ms Low said that she would not be disclosing further information about the agency, but appealed for everyone to "keep a close eye on your domestic helpers".

She also said: "There is nothing I want more than justice for my daughter, is that too much?"