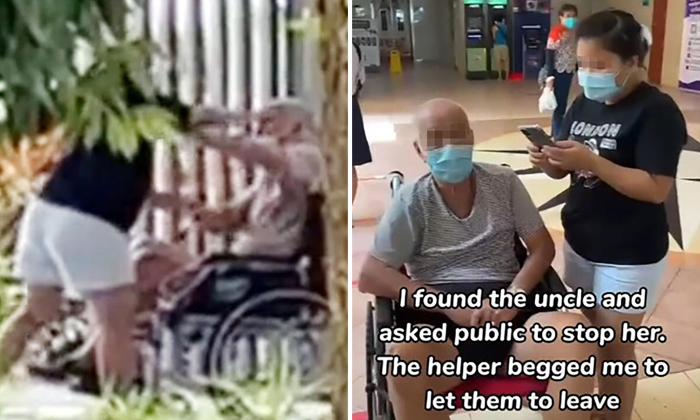 A domestic helper is assisting with police investigations after she was seen hitting a wheelchair-bound elderly man in Queenstown.

According to Shin Min Daily News, the incident occurred at Block 53 Strathmore Avenue on February 28, at around 2.30pm.

Ms Yang, a 33-year-old housewife, said she had been on the way home with her son when she witnessed the maid using her hands to hit the wheelchair-bound man in the head.

She recounted: "The whole process lasted around two minutes. The maid kept slapping the old man on the head and he raised his hands to shield himself.

"I took a video as evidence but couldn't watch any longer, so I went to scold the maid."

Ms Yang noticed that the elderly man was not wearing a mask. When the maid saw Ms Yang, she put on a mask for the man, then hurriedly turned around and pushed him away.

Worried about the elderly man, Ms Yang followed the pair to Dawson Place, where she met up with her husband.

Ms Yang's husband confronted the maid with the video and asked if the elderly man had been beaten. The maid claimed that she was just 'playing' and tried to leave with the old man.

Ms Yang and her husband decided to call the police as well as alert the elderly man's son.

"The maid started begging us to let her go. If she really had a clear conscience, why was she in such a hurry to leave?" said Ms Yang.

The police said they received a call for assistance at 2.45pm.

A 36-year-old woman is assisting with investigations into a case of voluntarily causing hurt.

Related Stories
Maid who recorded and shared nude videos of elderly man gets 17 months' jail
Maid gets up to 'hanky panky' with man in front of wheelchair-bound employer for 2 hours
Maid hit employer's head with laptop until it broke as she robbed her
More About:
maid
assault
elderly
TikTok