Maid falls 4 storeys from Bishan block, says she does not remember what happened 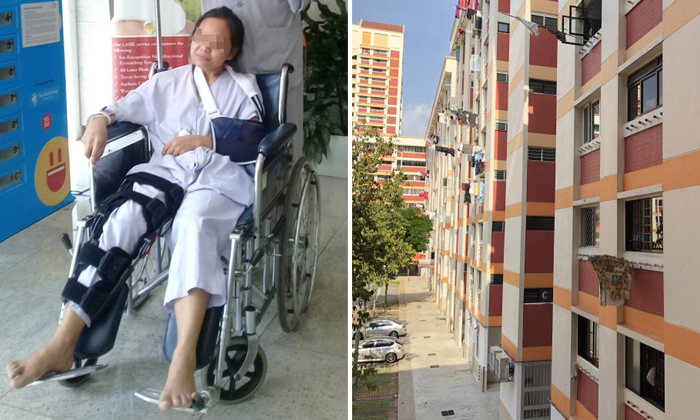 A domestic worker fell from a fourth floor unit at Block 153 Bishan Street 13 on Aug 5, and later said that she does not remember what happened.

The incident occurred at around 9am.

In response to a Stomp query, the police said that they were alerted to a case of attempted suicide involving a 28-year-old woman at 6.31pm.

A 70-year-old retiree, Mdm Zhou, told Shin Min Daily News that she saw the Filipino maid lying at the foot of the block, looking weak and in pain with both hands shaking.

Mdm Zhou then called the ambulance.

On Wednesday (Aug 15), Shin Min contacted the maid, who had fractured her leg as well as sustained bruises on her arms and neck during the incident.

During the interview, she said that she was lucky to be alive, but claimed that she does not recall what happened.

The maid, who has been working for a year at the flat, said: "My memory stopped at the night before. I was preparing dinner and have no impression of what occurred after that. When I woke up, I was lying in hospital."

The Embassy of the Philippines in Singapore has been notified of the incident and the maid might be sent back to her home country for further treatment.

According to Shin Min, the maid's employer might terminate her contract due to the incident.

Although reporters were unable to reach her employer, it is understood that someone has visited the maid in hospital.

Related Stories
Maid slips off window ledge at Simei block, caught by neighbour, fall broken by elderly man on 1st floor
Maid dangling on parapet: She climbed out of window after being locked in room while cleaning
Filipino girl, 4, falls four storeys from Tampines flat after being left alone at home
More About:
accident
injured
fall
maid