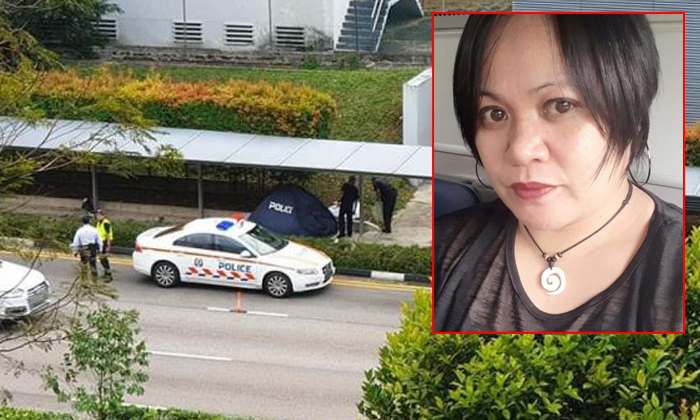 A 49-year-old woman was killed after a car went out of control and hit her while she was walking on a covered walkway outside Farrer Road MRT station in Bukit Timah.

The police said they were alerted at around 6am on Saturday to a hit-and-run accident involving a pedestrian and a car in Farrer Road, heading towards Queensway.

The victim, a Filipino domestic worker, was pronounced dead at the scene by a paramedic. The New Paper understands her name is Lyn Ocampo Santos.

The police subsequently arrested a suspect, 24, for causing death by dangerous driving.

Chinese-language evening daily Lianhe Wanbao said Ms Santos had taken a bus to the nearby Empress Road Market and Food Centre and was walking on the covered pavement when the accident happened.

She went there every morning to shop for groceries and would meet her sister, who also works in Singapore, and other maids at the food centre for breakfast.

The owner of an Indian food stall, who wanted to be known only as Mr Shahu, 59, told Wanbao that Ms Santos' sister and friends were waiting for her to have breakfast that morning, but she did not turn up.

"The sister then received a call from the police and panicked when she found out about the accident."

She told her friends and the hawkers that Ms Santos was walking to the market on the covered walkway when a car crashed into the walkway and hit her from behind.

Ms Santos, who had been working in Singapore for about 15 years, is survived by a husband and two sons in the Philippines, Wanbao reported.

She had been planning to make a trip home in March next year to attend her 18-year-old son's graduation ceremony.

Her other son is seven.

She added that Ms Santos, who was the oldest in her family, had come to work in Singapore so she could support her siblings at home.

Her husband, who works in a bank in the Philippines, was planning to fly to Singapore last night to claim her body.

Stallholders in the market described Ms Santos as a cheerful and friendly person, and many were saddened by her death.

Mr Shahu said that she had patronised his stall frequently.

He said: "She was friendly and easy-going. About five or six of them would gather every morning to have breakfast after their shopping, and she would greet everyone.

"When we found out about the accident, we were all heartbroken."

A stall owner who did not want to be named told Wanbao that Ms Santos had placed orders at some stalls the day before, telling them that she wanted to organise a gathering.

He said: "We knew about what happened when one of her friends went to the stalls to cancel her orders. This is very sad."

Police investigations into the accident are ongoing.

Anyone with information can call the police hotline on 1800-255-0000, or submit information online at www.police.gov.sg/iwitness