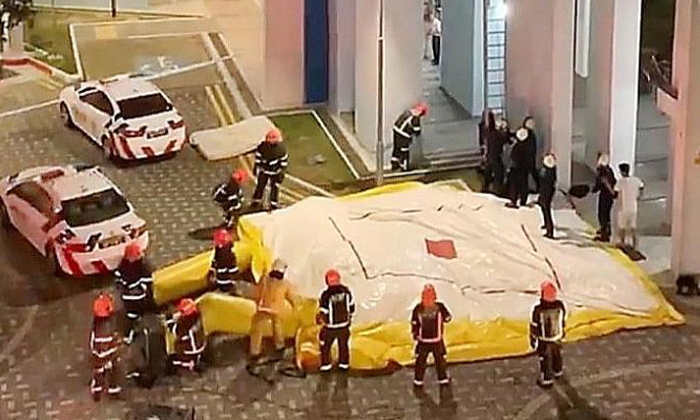 She heard screaming in her flat and rushed to the kitchen to see what the commotion was about.

To her horror, Miss Tam saw her mother in a panic, as their terrified Indonesian helper desperately clung to the clothes rack outside their kitchen window, four storeys up.

The incident happened on Sunday at Block 38A, Bendemeer Road, at about 7.30pm.

Singapore Civil Defence Force (SCDF) officers eventually managed to get the domestic helper from a ledge outside the kitchen window safely back into the flat.

A safety life airpack had by then been set up at the foot of the block as a precautionary measure, an SCDF spokesman said.

The woman was taken to Tan Tock Seng Hospital with minor injuries.

Her employer's daughter, who wanted to be known only as Ms Tam, said the helper had accidentally fallen out the kitchen window of their four-room flat while collecting laundry.

It was her first day at work, she added.

The 24-year-old student told The New Paper yesterday: "She was hanging on to the clothes rack. I quickly reached out my arm and grabbed her, but I knew I wouldn't be able to hold on for very long."

Miss Tam said she shouted for help to passers-by below her block, and about 10 men came up to her flat to help hold on to her helper. One of the men even tied a rope around her to make sure she wouldn't fall.

"Luckily there was a sloped ledge beneath her, and when she started to calm down, she managed to support herself a bit," said Miss Tam.

Chinese-language newspaper Shin Min Daily News quoted an eyewitness as saying that someone brought out a mattress and placed it on top of two large rubbish containers below the window in case she fell.

Miss Tam said two SCDF officers eventually climbed up a ladder to the ledge and lifted the helper up through the window.

The terrified helper fainted in the flat shortly afterwards and was taken to the hospital, she added.

"The agency has returned her home to Indonesia," said Miss Tam.

A neighbour who lives on the third storey of the same block, Mrs Amanda Lim, 36, said she was returning home from work when she saw what happened.

The interior designer said: "I was shocked to see her there. At first, I thought it was a suicide attempt."

In a press release that year, it said employers of FDWs are not allowed to let them clean the exteriors of windows except when an employer is present and window grills are installed and locked, during the entire cleaning process.

It added that if FDWs are required to hang laundry outside the window using bamboo poles, employers should ensure they do not stand on elevated platforms or on tip toe.

Related Stories
Maid falls 4 storeys from Bishan block, says she does not remember what happened
Man gets pulled back into Yishun flat by SCDF after stepping out onto parapet to clean windows
Elderly man gets stuck on walkway shelter in Bishan after failing to retrieve grandson's toy plane
More About:
rescue
maid
fall