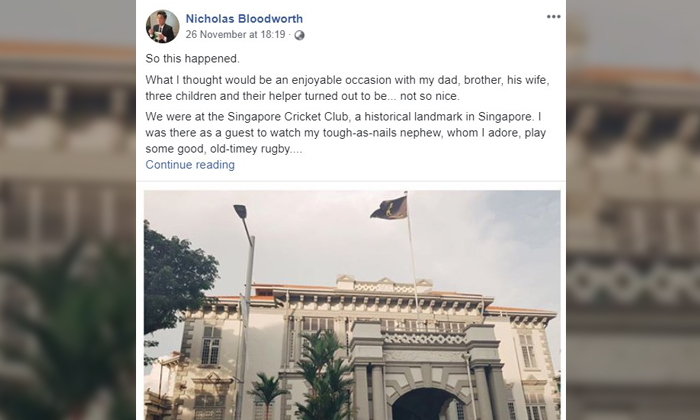 A maid was barred from having dinner at the Singapore Cricket Club (SCC) last Friday (Nov 23), sparking a discussion on the policies of private clubs here, some of which do not allow domestic helpers on their premises.

On Monday (Nov 26), freelance actor Nicholas Bloodworth recounted in a Facebook post how his family, along with his brother's maid, Mary, had gone to a restaurant in the Singapore Cricket Club (SCC) last Friday for dinner, only to be told by a staff member that "they don't allow maids here".

According to Mr Bloodworth, 33, the staff member said maids were not just prohibited from the eatery but the entire premises of SCC. He also claimed that the staff member told him that Mary had to wait in the carpark.

Mr Bloodworth claimed that when the staff member was asked how he would know Mary was not a family member, he said: "I will know."

Mr Bloodworth added that his father, a club member, had requested to sign Mary in as a guest but that this had not been allowed. Eventually, the family had a quick meal inside the restaurant and packed a share of food for Mary, who took Mr Bloodworth's niece for a walk outside.

Though Mary took the incident in her stride, Mr Bloodworth, who is not an SCC member himself, said he was "furious" at what had happened and that his father was "particularly upset".

He wrote: "If you guys (SCC) have this type of policy, then why aren't you open and crystal clear about it."

What I thought would be an enjoyable occasion with my dad, brother, his wife, three children and...

Calling the policy "good, old-timey discrimination", he added: "I believe in personal choice. If you want to be a part of a club that has questionable, archaic practices, it's not my place to tell you to do otherwise.

"As long as no one gets hurt and the rules are fair, your time and money are yours to spend as you see fit... But this wasn't fair.

"It was not fair for Mary, who works hard and makes sacrifices like everyone else, to be deprived of having dinner with the family."

Netizens were divided on the issue. While some of them criticised the actions of the staff member, several others felt the club was justified in barring Mary, with a few noting that SCC's by-laws state that maids are not allowed on the premises.

A check of SCC's by-laws revealed a clause which states: "No domestic help providers or chauffeurs may be brought into the Club premises or use any of the facilities provided in the Club."

Acknowledging this, Mr Bloodworth told The Straits Times on Tuesday that his issue was not with the by-laws per se, but rather with such information not being clearly stated on the club's website.

"Who's going to read by-laws? I'm okay if you have such rules... but if I check your website and they're not stated there... that's not right," he said.

"Are they afraid of backlash? Because this is it, the backlash is coming now," he said, adding that he was not calling for a boycott of SCC but for the club to be more upfront about the no-maid rule.

However, he said that he intends to "never step into that club again".

In response to Mr Bloodworth's Facebook post, a spokesman for SCC said on Wednesday that club rules and by-laws are mandated by members and available on its public domain website.

"It is our members' obligation to be fully aware of and to comply with them, and to make sure their guests are aware of them," the spokesman added.

SCC is not the only club here with such policies. The by-laws of The Tanglin Club explicitly state that domestic helpers are not permitted on club premises. The same goes for the by-laws of The British Club, except for when maids are attending a function organised by the club for them.

A spokesman for The British Club said that the policy was put in place "quite some time ago", as some members were not comfortable having maids around. The spokesman added that it can get crowded on weekends, and the policy can help to alleviate this issue.

The spokesman added: "We have nothing against (maids), it's just that some members aren't comfortable."

The Hollandse Club's by-laws state that maids are allowed on its premises only in certain exceptional cases.

For instance, maids are allowed in if they are accompanied by members during special private events, if they are attending classes specifically organised for them at the club, or if members are unable to accompany their children who are at least three years old, who are taking part in classes at the club on weekdays.

The American Club generally requires maids to be signed in and accompanied by members at all times, except under special circumstances.

Some other clubs, like The China Club Singapore, have no such policies.