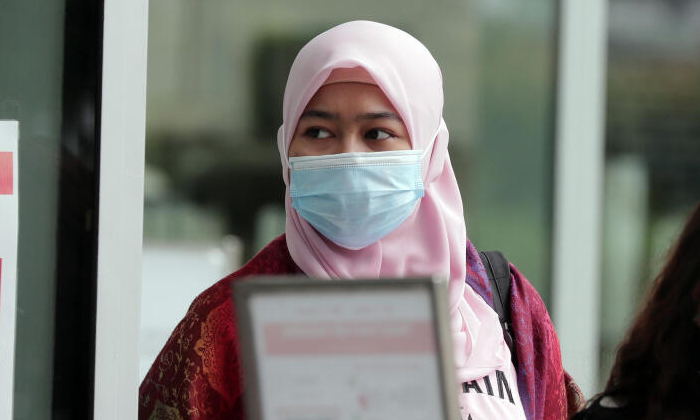 A domestic helper who was accused of assaulting her employer's four-month-old infant and tampering with the teats of the girl's milk bottles has been acquitted of all charges against her, following a trial.

Nenti, now 26, who contested two counts of mischief and one count of assault, had been accused of committing the offences in a Punggol flat in 2019.

The Indonesian woman, whose name has only one word, burst into tears when District Judge John Ng gave her a discharge amounting to an acquittal on Friday (Jan 21).

Stressing that there is no direct proof of the commission of the three purported offences, the judge said: "There were no witnesses to the alleged offences. There was CCTV footage which might have thrown light on the matter, but it turned out to be inconclusive."

Details about the baby cannot be disclosed as individuals below 18 years old are covered under the Children and Young Persons Act, which protects their identity.

During earlier proceedings, the court heard that Nenti was engaged to work for the household in July 2019.

The baby's father testified last year that he was on his way home from work in August that year when his wife called him and said she had found scratch marks on their daughter's legs.

The man said he checked on the baby after he reached home just after 6pm and saw the scratches. When confronted, Nenti denied causing them, the court heard.

Suspecting that Nenti could be the one who inflicted the injuries, the father alerted the police.

Officers soon arrived at the flat and took the maid away. The man said there was no more contact between him and her after that.

Nenti was no longer working for the household when the man noticed that two teats of the baby's milk bottles appeared to have been enlarged.

He had earlier told Judge Ng that their openings were initially small and circular in shape. The two teats, however, appeared to have wider openings with slits.

In her earlier statements to the authorities, Nenti admitted that she had intentionally scratched the baby's legs.

Initially, she had also admitted that she had cut the teats as she was "angry" with the child's mother, who had purportedly scolded her every day.

The maid, however, denied scratching the child and cutting the teats when she testified in court last year.

Defence lawyer Josephine Costan, who represented Nenti pro bono, told the court on Friday that there was no evidence that the maid had committed the offences, "save for her statements".

In delivering his verdict, Judge Ng quoted a report from the Health Sciences Authority which stated that it could not be determined if the teats had been tampered with as "defects of visually similar appearance could also have been produced through wear and tear".

He added: "It is reasonable that the accused had perceived that the police did not believe her and that she had to admit to the allegations in order for the investigations to be completed soon and for her to return to Indonesia early."

The judge also said that he is "satisfied that it is unsafe" to convict Nenti of any of the three charges based on her retracted confessions "in the light of the circumstances of the totality of evidence adduced at trial".

Related Stories
Maid accused of assaulting baby and tampering with teats of feeding bottles claims trial
Maid who filmed herself bathing elderly employer, posted video on TikTok to be charged
Maid threw toddler on sofa for 'messing up the house', caused her to hit her head on armrest
More About:
maid
abuse
baby
assault
court