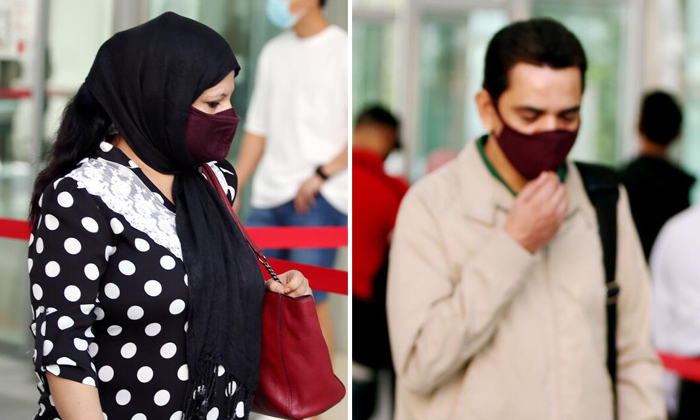 A woman slapped and punched her domestic helper who was on her first day of work.

She tormented Ms Amandeep Kaur for about two months, with her husband joining in the abuse later.

The maid finally fled through a window of the couple's flat on the fourth storey of a Housing Board block in Rivervale Crescent, Sengkang.

The prosecution said Farha Tehseen and her spouse Mohammad Tasleem "lashed out" at Ms Kaur, an Indian national who was then 27, as they saw her as a "poor performer" who "did not meet their standards".

Farha repeatedly assaulted Ms Kaur in November and December 2016. She also threatened to beat the maid with a stick.

Tasleem punched and kicked the maid on two separate occasions, the court heard.

On Tuesday (June 9), District Judge Shaiffudin Saruwan found Farha, 39, guilty of nine counts of assault and one count of criminal intimidation after a trial.

In his submissions, Deputy Public Prosecutor Houston Johannus said that Ms Kaur started working for the couple, who have two young sons, on Nov 9, 2016.

He added that on weekdays, the maid would go to bed at around 3am and wake up about two hours later. She would wake up at around 7.30am on weekends.

During the trial, Ms Kaur testified that Farha treated her "very badly" from the outset.

The DPP said: "Amandeep testified that when she asked Farha why... Farha would reply 'because I'm the one who called for you to come here. I can do whatever I wish onto you'."

According to court documents, Farha also accused the maid of possibly having an affair with her husband.

The court also heard that Ms Kaur initially had a good relationship with Tasleem and that he was kind to her. But it soured over time.

DPP Johannus said that Farha slapped and punched the maid on the first day she started working for her.

Ms Kaur testified that Farha slapped her while she was making flat bread in the kitchen. She also said that Farha later punched her right eye.

The DPP told Judge Shaiffudin: "Amandeep did not know on both times why she was assaulted because Farha did not say anything to her."

The housewife continued physically abusing Ms Kaur after this, assaulting her with objects including a broomstick, a shower head, a rolling pin and a pair of tongs.

Ms Kaur testified that Tasleem assaulted her for the first time in mid-December 2016, as he felt that she was slow in preparing milk for his younger son, who was then two years old. Tasleem then punched her right eye once.

He assaulted her for the second time about nine days later when he kicked her waist twice. He did not say anything to her before he committed the offence, the court heard.

On Dec 31 that year, Farha kicked the maid's lower back twice before she grabbed her hair and pulled her out of a room. Ms Kaur was also punched once on her nose and it bled.

The DPP said: "She then told Amandeep that they were going to take their children to the park, and to complete the chores in five minutes, such as ironing the bed sheets.

"If not, she would beat her with (a stick) and throw her out of the window. If people were to ask what happened, she would tell them 'this girl's mental state of mind was not good'."

The couple and their children left the flat soon after, locking the front door behind them.

The DPP said that "in a moment of utter terror and desperation", Ms Kaur, who did not have the house keys, climbed out of a living room window and perched herself "dangerously" on a ledge.

A foreign worker, Mr Mani Manoharan, who was doing some painting works in the estate, later spotted the maid and used a gondola to take her down.

Following her rescue, Ms Kaur was placed in the care of the Good Shepherd Centre, which provides shelter to people such as abused women.

A medical report later stated that she had injuries such as multiple bruises in places including her left arm.

The couple are represented by lawyer Peter Keith Fernando. According to court documents, the main defence was that of "bare denial".

Among the offenders' main arguments, they claimed that Ms Kaur's injuries were due to her "uneven skin tone (and) marks" sustained either by accident or while working in the fields back in India.

Farha and Tasleem are expected to be sentenced on Aug 21.

For each count of maid abuse, an offender can be jailed for up to three years and fined up to $7,500.