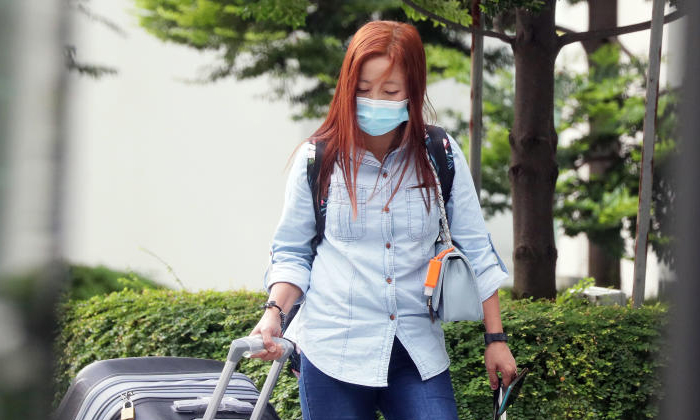 A domestic worker who was stressed by her workload took it out on the elderly bedridden woman she was employed to care for by abusing her.

On one occasion, the Myanmar national pressed the base of a water bottle against the mouth of the woman who suffers from arthritis and is incapable of defending herself.

In another incident, Aye Aye Naing, 40, pulled the elderly woman, 76, by her hair into a seating position.

On Monday (Dec 6), Aye Aye Naing appeared before a district court and was sentenced to 30 weeks' imprisonment for abusing the vulnerable woman.

She was convicted of three charges of voluntarily causing hurt towards a vulnerable person.

One charge under the same offence was taken into consideration for her sentencing.

The court heard that Aye Aye Naing was employed by the victim's daughter and lived with the family in a flat in Yishun.

Her assault came to light when the maid's employer installed a closed-circuit television (CCTV) camera in her mother's room after the elderly woman told her the helper was hitting her.

Aye Aye Naing claimed the elderly woman had fallen down, and her employer initially gave her the benefit of the doubt. But CCTV footage, some of which was played in court, showed otherwise.

In one of the videos taken on July 31 last year, the frail woman can be seen lying in bed while Aye Aye Naing uses her hand to press down on the victim's nose and jab her face repeatedly.

In another clip taken on Aug 14 last year, Aye Aye Naing can be seen shaking an alarm clock over the victim's face and hitting the woman on the mouth with it.

On Aug 18, 2020, Aye Aye Naing pulled the victim by her hair to make her sit up. Minutes later, as the woman was lying in bed, the domestic helper came towards her and pressed the base of a water bottle against her mouth.

A medical examination on the elderly woman found bruises over her forehead, right cheek, left shoulder and left thigh.

An Institute of Mental Health report stated that Aye Aye Naing had an adjustment disorder.

Deputy Public Prosecutor Selene Yap told the court that Aye Aye Naing had no issues with her employer and that the victim treated the domestic worker very well.

"However, the accused became stressed and frustrated with her employer scolding her for not doing things in a proper manner. Accordingly, she vented her anger on the victim," said the DPP.

Aye Aye Naing was represented by lawyer Lum Guo Rong, who urged the court to impose a six-month jail term. He noted that the assaults were not premeditated but outbursts, as his client had to care for the victim on top of doing the housework in the six-person household.

Mr Lum added that the victim enjoyed having the domestic helper around and his client saw her as a grandmotherly figure.

For each count of voluntarily causing hurt, offenders can be jailed for three years, fined $5,000, or both. The maximum sentence can be doubled for crimes against vulnerable victims.

Related Stories
Maid on trial for murdering employer's mother-in-law claims she was abused
85-year-old woman's hip fractured after maid pushed her to hurry her along
Woman assaulted maid over work performance, made her do squats for looking 'sleepy'
More About:
maid
abuse
elderly
court