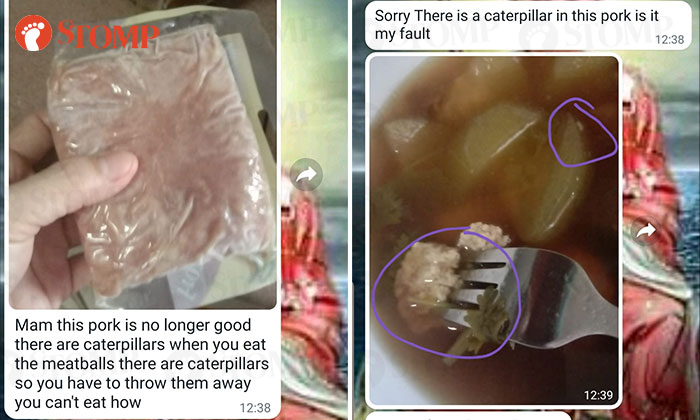 The Singapore Food Agency (SFA) is investigating an incident in which a woman found maggots in frozen pork.

The Stomper shared she had bought a pack of frozen minced pork from Giant supermarket at Block 21 Ghim Moh Road on Mar 27.

The maggots emerged after her helper used the meat to cook pork meatballs hairy gourd soup.

"My helper cooked the meat with other ingredients but she said the maggots came from the pork," she said.

"I googled and read that maggots can still survive after being frozen!"

She reported the incident to SFA.

In response to a Stomp query, the SFA said it has received the feedback and is investigating the matter.

"Food safety is a joint responsibility," an SFA spokesman said.

"While SFA puts in place and enforces the regulatory measures, food retailers must play their part by adhering to good food hygiene and preparation practices.

"Members of the public who come across any potentially errant food retailers should report to SFA via the online feedback form (www.sfa.gov.sg/feedback).

"SFA will not hesitate to take enforcement action against errant food retailers if we have obtained sufficient evidence."