Mad dashes, door-breaching and drugs thrown out of window: Here's what goes on in a CNB drug bust 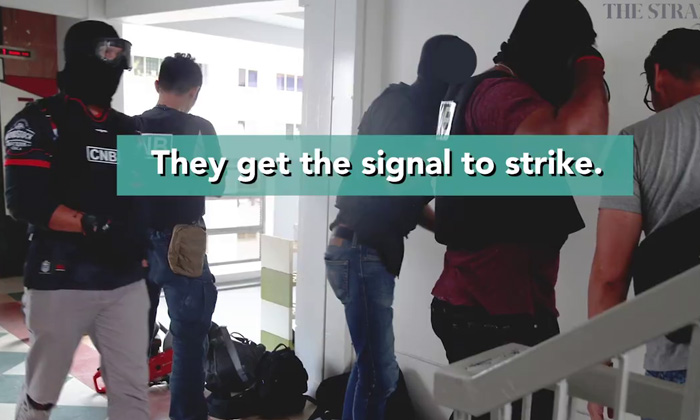 Ten seconds is all it takes for officers from the Central Narcotics Bureau (CNB) to rush into an HDB unit and arrest a suspect.

A video, produced by The Straits Times, showed members of CNB's Special Task Force (STF) rushing into an HDB unit near Teck Whye Lane in a drug raid on the morning of Oct 10.

The video was posted on The Straits Times' Facebook page on Oct 13 after reporters from The Sunday Times were allowed to follow the team to witness the raid up-close.

More than a month ago, The Straits Times reporters were allowed to join STF and participate in a few training sessions.

Prior to the Oct 10 raid, the CNB Special Task Force (STF) had a 63-year-old Singaporean man under close surveillance.

The video starts with the men preparing themselves on a lift landing one floor above the suspect's unit by donning stab-proof vests, slash-proof gloves and masks.

One of them was also seen carrying a piece of door-breaching equipment.

After they were given a signal, they immediately rushed downstairs and dashed straight into the HDB unit of the suspect.

However, they did not have to use the door-breaching equipment as the suspect was just returning to his flat with plastic bags of food at the time.

The STF took less than 10 seconds to burst into the flat, catching the suspect by surprise and giving him no time to react.

The suspect was then handcuffed while his pockets were searched.

He had allegedly thrown drugs out of the window just as the STF entered his home.

When he was escorted to the ground floor, officers found packets of a brown substance, suspected to be heroin, strewn on a grassy slope.

After bagging them as evidence, the STF took the man back to his flat to continue searching his home.

CNB subsequently recovered about 876g of heroin, 29g of Ice and cash amounting to more than $87,000 from his home.

STF senior assistant director William Tan said that the STF are constantly assessed in scenario training to keep them in top form during operations where their reaction, speed, creativity and decision-making, such as on the appropriate use of force, are vital.

"In terms of training, we try to be as realistic as possible," said Superintendent Tan.

"We add other elements, we plant 'family members'.

"You have to handle all the other people inside the house."

Read the full story at The Straits Times