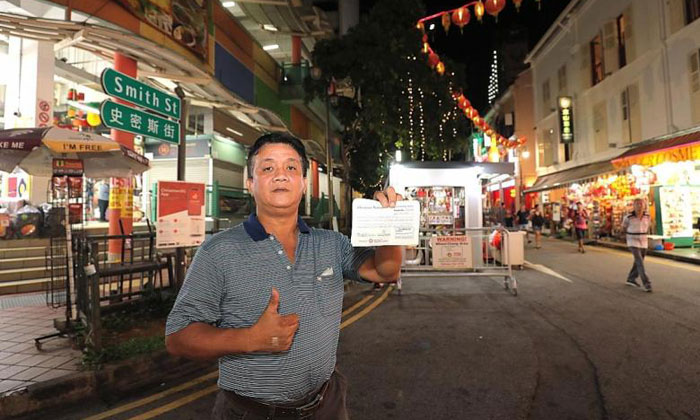 A stall at the Chinese New Year festive bazaar in Chinatown next year went for a whopping $13,899 in rental.

This is the highest bid in six years.

The bid was for the "lucky" stall in the Chinatown Chinese New Year festive street bazaar, which will be held from Jan 18 to Feb 4 next year.

Stallholders said the location of the stall at the junction of Smith Street and Trengganu Street is a hotspot for visitors at the market, and thus can bring in the most money.

The lucky owner of the stall is Mr Ye Wei Qiang, who has been setting up his stall at the festive bazaar for close to 30 years.

Mr Ye, 55, told The New Paper yesterday: "This year, I decided to up my stakes by $5,500. But I did it without hesitation because I got wind that my competitor had recovered from his sickness and would be bidding this year."

He said that he and his rival has been at odds for close to 10 years, and would fight over the "lucky" stall every year. He had lost out to his competitor in the 2017 bazaar.

At the bazaar next year, Mr Ye said he will be selling mostly pomelos at his "lucky" stall.

His pomelos can range from $6 for a regular pomelo to $12 for a large one.

Mr Ye said he will be also renting the stall across the "lucky" stall for about $5,000.

This brings the number of stalls he will have at the bazaar to five, managed by him and four other business partners, and bringing his total rental expenditure to at least 20,000.

"It is very important to get the space near the lucky stall because there is a lot of traffic around that area," he said.

Mr Ye will be selling Chinese sausages and other snacks at the opposite stall.

Despite the high rent, Mr Ye is confident that he will be able to make a profit.

"I make a profit every year, and I have a few other stalls around the bazaar as well.

"It is expected that the profit will dip slightly due to the high rent, but we have regular customers, and business is so good at that location. We can sell baskets at one go," he said.

On regular days, Mr Ye is a durian seller at Katong.

There will be 313 stalls filling the streets, selling all sorts of food and decorations for the Chinese New Year celebrations.