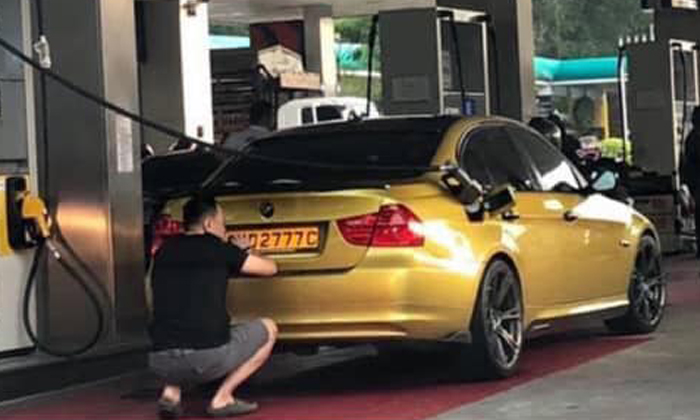 The Land Transport Authority (LTA) is investigating an incident where the driver was a Singapore-registered BMW was photographed switching his licence plates before speeding on a highway in Malaysia, a spokesman told Stomp.

The May 18 incident took place at a Petron station in Gelang Patah, Johor, which is about a 10-minute drive from Tuas Checkpoint.

Photos circulating online show the male driver changing the original licence plate SLX27E on his gold BMW 320i to one displaying SKD2777C, which belongs to a Hyundai Elantra.

About an hour after the switch, the BMW was caught speeding on a Malaysian highway.

However, the RM150 (S$49) summons was issued to the Hyundai vehicle instead, as seen in screengrabs posted by Facebook page SG Road Vigilante - SGRV.

Another speeding summons dated July 22, 2017, had also been issued to the Hyundai.

In response to a Stomp query, an LTA spokesman said: "The owner of the Hyundai vehicle has filed a report with LTA and we are currently investigating the matter."

Under Malaysia's Road Transport Act, if a car is found with a vehicle number plate that does not belong to it, the offender could be fined up to RM5,000 and jailed for up to a year.

The vehicle could also be seized, reported The Straits Times.

In Singapore, the penalty for displaying a forged number plate is a fine of up to $5,000 and/or jail of up to a year.

Related Stories
Video of man tapping in and out of MRT gantry repeatedly: NETS warned by LTA over testing activities
BMW driver arrested for dangerous driving after police chase from PIE to Jurong East
Gojek driver issued warning by LTA for recording and sharing viral video of himself and passenger
More About:
lta
BMW
illegal
Malaysia